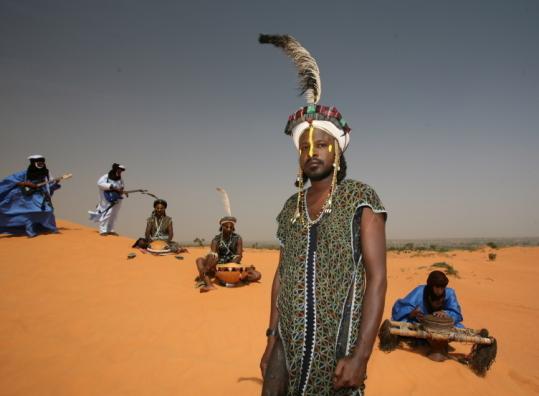 Their name means "Stars of Tradition," but the members of Etran Finatawa are just as much cultural pioneers, melding long-separate ethnic traditions of their native Niger in the service of nationhood - and in the process, producing one of the most fascinating recent hybrids on the African music scene.

The band, which visits the MFA on Oct. 8, has successfully merged the trancey guitar-driven "desert blues" of the Tuareg ethnic group with the polyphonic vocals and spare percussion of the Wodaabé. It features three members from each community. Their new CD, "Desert Crossroads," is an exciting record of songs in both Tuareg and Wodaabé languages that possesses a deep feeling of roots while never feeling obscure or monotonous.

Etran Finatawa formed only recently, joining members of two separate traditional groups that were invited to perform at the 2004 edition of the Festival in the Desert - a key event on the world-music circuit, held in Timbuktu, Mali, and crucially, an outlet for musicians from impoverished nations of the Sahara desert region.

The idea of playing a song or two together germinated at the home of Sandra van Edig, a German expatriate and onetime anthropologist who was living with her husband, a development worker, in Niamey, Niger's capital.

As van Edig, who became Etran Finatawa's manager, recalls on the phone from Bujumbura, Burundi, where she now lives, the success of the joint finale at the festival revealed the potential for something that had never been done before: combining the music of these two nomadic cultures, ones that shared a broad swath of grazing lands but virtually no cultural collaboration.

"Nomads are very proud of their culture, and very individual," van Edig says. "And the Wodaabé were never very instrument oriented. It's totally new to find a guitar melody for a Wodaabé song. It had never been done before."

Nor was there much precedent for professional musicians other than griots, the traditional praise singers. "Maybe people would stick some money on their forehead, but they were not really paid," van Edig says. Indeed, until recently the Etran Finatawa members maintained a semi-nomadic life. "They'd just stay in the capital for a few months of the year, doing small jobs. Then the rainy season starts and they're off with their cattle in the grasslands."

In just four years, the band members have become a different type of nomad - full-time musicians who tour worldwide. A demo tape recorded on the terrace of van Edig's house under primitive conditions turned into a first album on the World Music Network label. Then came an invitation to the prestigious WOMAD festival in the UK. "Things really started to speed up then," van Edig says.

In separate phone conversations from Niamey, Alhousseini Anivolla and Bagui Bouga, de facto spokesmen for the Tuareg and Wodaabé sides of the band respectively, describe the challenge the band faced at the beginning.

"It was very complicated because we don't speak the same language and we don't have the same traditional rhythms," says Bouga. "We had Wodaabé songs and it was difficult to match them with the Tuareg scales."

"We're all nomads, yes, but from very different cultures," says Anivolla. "But everyone understood that even though we could do things alone, it was better to do it together, because we are people who live in the same country and share experiences."

In Niger, a country with a small and dispersed population, and a small and poorly funded cultural infrastructure, the opportunity to convey through music a sense of nationhood and shared struggle was one that the members of Etran Finatawa felt they had to seize - even at the risk of alienating traditionalists by crossing ethnic and stylistic barriers. As Bouga puts it, all they are doing is expressing what's happening in people's lives.

"We're not changing Wodaabé culture," he says. "We dress Wodaabé, we sing Wodaabé. But we're modernizing it by singing with the Tuaregs and their guitars. We're composing songs to talk about the way life is changing. That's reality."