On a quest to give female composers their due 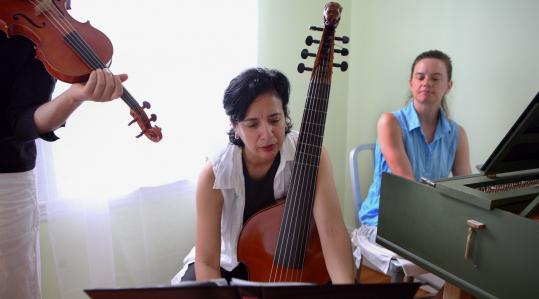 Take the Parisian Julie Pinel, for example. Her passionate airs, written during the early 1700s, had been consigned to archives - and Pinel herself had been mostly forgotten - until Gutiérrez noticed her name in a 1986 book about female Baroque composers.

"I'm not a scholar, and I don't pretend to be one," says Gutiérrez, sitting on a couch in her Arlington home, surrounded by binders full of facsimiles of centuries-old music. "But I read my books."

For their work unearthing and performing Baroque women's music, Gutiérrez and La Donna Musicale, which she founded, have earned glowing reviews in early music journals and respect from those who have heard them perform. But they - and the women whose music they play - have remained relatively little-known in America.

Now, bolstered by a prestigious fellowship from the Radcliffe Institute for Advanced Study and looking forward to a three-continent autumn tour that begins today with a concert at Ellingwood Chapel in Nahant, the group is on the cusp of earning wider recognition.

"Usually, it's kind of divided - you're either a musicologist or a performer," says Judith Vichniac, director of the Radcliffe Institute's fellowship program. Previous arts fellows have included luminaries like writers Alice Walker and Sue Miller, and playwright Anna Deavere Smith. "But what [Gutiérrez] does is bring those two things together."

Gutiérrez, who played the recorder when she came to the United States to learn English in 1981, eventually settled into playing the viola da gamba - a bowed Baroque instrument held between its player's legs like a cello. She was a graduate student studying early music at Indiana University when she noticed that a series of concerts scheduled in honor of Women's History Month included music written only by men.

"There [was] no one piece by any woman composer. Old, new, none - no period of music was represented by a woman," says Gutiérrez.

It's not that women weren't composing years ago, or aren't composing now - it's just that, with notable exceptions like Baroque harpsichordist Elisabeth Jacquet de la Guerre, who lived in France at the turn of the 17th century, their music has remained mostly unplayed, confined for centuries to paper.

Spurred by women's absence from the early music repertoire, Gutiérrez has traveled around the world, visiting libraries, studying manuscripts, and collecting hundreds of pieces by French and Italian women that have not been heard by modern audiences - and may never have been played at all.

"It is a thrill - it's like [being] a detective," says Gutiérrez. "You're on a quest for what these women did, what they felt, what their audience felt."

Once Gutierrez has collected music, she winnows it, choosing the best pieces for recordings and concerts. Then she presents those pieces to the members of La Donna Musicale, many of whom also perform in other early music groups in Boston and across the country - and who hail from all over the world.

"I don't get to sing this type of music in other ensembles," says Daniela Tosic, a mezzo-soprano who grew up in the former Yugoslavia and lends her voice to Tapestry and Blue Heron, among other groups. "Not many people undertake to bring the women composers of the Baroque era to the foreground."

Tosic, harpsichordist Ruth McKay, and Baroque flutist Na'ama Lion met Gutiérrez in the late 1980s and early 1990s, when all four were students at the Longy School of Music in Cambridge. They will be joined on La Donna Musicale's upcoming concert tour by a rotating cast, including vocalists Sherezade Panthaki, Aaron Sheehan, and Lydia Knutson, and violinists Laura Gulley and Cecile Garcia-Moeller.

Since its start in 1992, La Donna Musicale has studied at least 17 composers and recorded three CDs. Two focus on the music of Antonia Bembo, a mysterious student of the famous composer Francesco Cavalli who ran away to France from her home in Venice in the late 17th century. She wrote volumes of unpublished, unedited work: quirky compositions with missing accidentals, unusual melodic jumps, and harmonies that edge into the realm of bizarre.

"She doesn't follow the rules, which some people see as less of a composer," says Gutiérrez. "But if the music moves you it is worth[while]," she says. "There are some sections of the music of Antonia Bembo that I listen and tears still come to my eyes."

Bembo's manuscripts had to be translated into modern scores - a painstaking and delicate process of balancing the needs of modern audiences with historical accuracy. Claire Fontijn, Bembo's biographer and an associate professor of musicology at Wellesley College, has played with La Donna Musicale and helped Gutiérrez decipher Bembo's notations, which are riddled with idiosyncrasies and rhythmic errors.

"Because [Bembo's] work had not been edited during her lifetime, no one went through it and said this works, this does not work," says Fontijn. "It was excavation work that we did in the rehearsals. We'd make those decisions from the bass up."

The ensemble's two Bembo recordings and the Pinel album were all warmly received by critics at Goldberg magazine, one of the field's most respected journals. Music by both composers, plus pieces by Jacquet de la Guerre, another Cavalli student, Barbara Strozzi, and others, will be featured in the group's autumn concerts in Massachusetts, Colombia, France, and the American Southwest.

Few early music groups around the world perform work by female composers, and Gutiérrez says there is a persistent feeling among musicians that the best music is written by men. At a recent national gathering of viola da gamba players, she was greeted with skepticism when she told a fellow female musician about her work resuscitating music composed by women.

"This lady said, 'Women composers? Is it any good?' - with total discredit," says Gutiérrez. "Sometimes women dismiss their own very fast."

Observers of early music, however, say that La Donna Musicale's reputation is on the ascent - carrying with it, perhaps, the reputations of long-ignored composers.

"La Donna Musicale has sort of risen to the top of the local Boston-based groups," says Kathleen Fay, executive director of the Boston Early Music Festival, whose annual concert series and biennial festival lead America's early music scene and attract top musicians from around the world.

The ensemble has performed at the festival's Fringe concerts for emerging artists, and may soon earn an invitation to the more celebrated Festival concerts, which are reserved for the best performers in the world. "That day is around the corner for La Donna Musicale," says Fay.

Meantime, Gutiérrez will spend the coming academic year supported by the $70,000 Radcliffe fellowship, sifting through hundreds of pieces by Italian female composers and picking out the very best. She'll also collaborate with a New York University musicologist to produce, with the help of a smaller grant from the E. Nakamichi Foundation, "La liberazione di Ruggiero," an opera by Francesca Caccini - the first opera written by a woman. Gutiérrez's goal is to showcase the artists' color and creativity by compiling at least three programs for La Donna Musicale to perform and eventually record.

"Music," says Wellesley's Fontijn, "needs to be played in order to live."

Emma Brown can be reached at ebrown@globe.com.