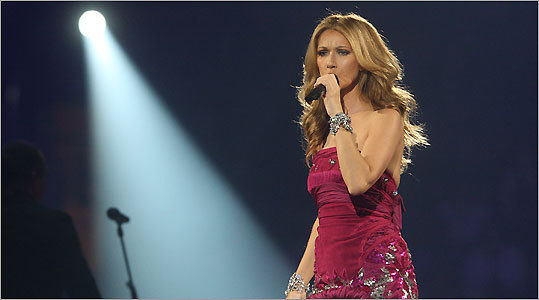 You can take the girl out of Vegas, but you can't take the Vegas out of the girl. And that's good news for Celine Dion fans heading out to the second of her two shows at the TD Banknorth Garden tonight.

Those who missed the lovably earnest French-Canadian chanteuse during her extended stay in Sin City can be assured the blinding glitz quotient has not dimmed a single sequin for her current tour, which kicked off last night with an energetic, two-hour, eight chest-thump performance.

Situated in the center of the arena, Dion's elaborate but elegant square stage featured lit panels, conveyor belts, two side runways, and four small pits that receded and arose ferrying members of her ten-piece band.

Central stages usually limit face time for each quadrant of the audience, but Dion was tireless in working the perimeter and the runways as she belted out the songs the sold-out crowd came to hear, the way they wanted to hear them with no big note left unsung.

Even when she wasn't front and center, there was never a dearth of stimulation, be it her own costume changes, the intricate lighting, the video imagery, or her cadre of dancers, deployed judiciously. And she had enough flat screens to start her own sports bar.

All of this pageantry of course fits Dion's theatrical way with her songs and their soaring pop style, and she didn't disappoint vocally. She came out guns blazing - or at least the adult contemporary version of guns blazing - with her hit remake of Cyndi Lauper's "I Drove All Night," scraping the ceiling with her tensile voice.

The night's best moments occurred when she played to her outsized strengths, surrendering to the windswept melodrama of "It's All Coming Back to Me Now" or the overheated pathos of "All By Myself" or the gentle, heartfelt "Pour Que Tu M'aimes Encore."

The swaying synth anthems - including mirror images "Because You Loved Me" and "I'm Your Angel" - were pleasant but innocuous with their generic, sloganeering exhortations to cry on shoulders or stand up strong but Dion sold them with her sincerity.

Pop balladeer Celine was a hit but "angry rocker" Celine, while still capable vocally, failed to generate much heat. Of the "edgier" tunes from her latest album "Taking Chances," only the patently campy, Eastern-Latino mash-up "Eyes on Me," featuring Dion swanning around in a silver-sequined minidress, leather pants, and billowing white cape, was much fun.

Dion graciously thanked the audience throughout the night, and called Boston her lucky charm. She closed, of course, with her luckiest if most syrupy charm "My Heart Will Go On."

It's a testament to her skill however, that even when the songs weren't strong, Dion was. Given recent trends in pop music, it's always a pleasure to be reminded that for some vocalists, auto-tune is a built-in mechanism.