A heavenly night with the Jonas boys 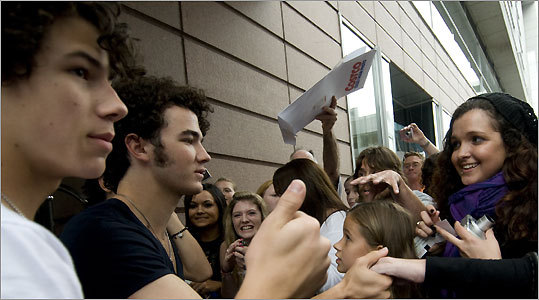 MANSFIELD -- How do you measure the power of a teen dream? It's as simple as a pop hook, mysterious as math, and vast as the distance between the Comcast Center parking lot and the far-flung freeway where scrawled love letters to the Jonas Brothers began appearing in car windows.

The Jonas Brothers, in a word, rule. The trio's show last night -- it was more of a visitation, really -- was a case study in perfect ratios: floppy curls to catchy power chords, god-given grins to a serious work ethic, classic craft to sugary sheen.

It goes without saying that the show was sold-out, and that the shed was filled with screaming tween girls and their parental units. More newsworthy is the fact that the fans got more (a really good concert) than what they came for (cellphone shots of Joe).

The trio's entrance was fit for the Second Coming: bursts of fire, regal pageantry from an all-girl string ensemble, and gargantuan rigging that transported the siblings over the stage in a grand arc and deposited them into the metaphorical embrace of their followers.

Happily, the string players doubled as cheerleaders and the anthems tumbled out in short order, each as well-built as the next, in a surprisingly satisfying set of songs. On paper, 100 minutes of fizzy, Disney-certified tunage sounds scary generous. In real life, brothers Nick (the somber one), Kevin (the sweet one), and Joe (the smoldering one) put on a gently kinetic show that made space for humor, poignance, a gymnastics interlude, and a Shania Twain cover ("I'm Gonna Getcha Good'') as well as ear-shattering idolatry.

The brothers debuted a handful of songs from their third album, "A Little Bit Longer,'' which comes out next week, and they were received as rabidly as the band's smash hits. And it's no wonder: new tunes like "Pushing Me Away,'' "Video Girl,'' and "Love Bug'' share identical DNA -- tight, tuneful, good-natured genes -- with "Year 3000,'' "Hold On,'' and "Still in Love with You.''

The requisite contemplative moments were models of boyish charm and blatant button-pushing, and the best one found the brothers sitting on stools at the end of the catwalk singing an especially tender version of "Gotta Find You.'' Each and every girl in attendance knew that the song was being sung to her, and her alone. Hearts melted. Mission accomplished.

Veteran entertainer Demi Lovato, who's almost 16, opened with a set of standard-issue anthems about good girls, bad boys, broken hearts, and parties. Her predictably perky moves and preternatural vocal stylings were peppered with a few off notes -- welcome glimmers of real feeling.