Like the candidate, Extra Golden seeks to make the most of diverse roots 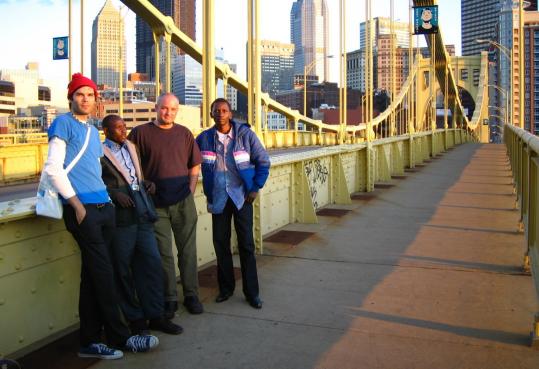 "I'm sending a special thanks," sings Extra Golden's Opiyo Bilongo on the band's song "Obama," which you could consider an audio thank-you note to the senator from Illinois. For Extra Golden, the support, and the gratitude, are of a distinctly personal bent.

Bilongo, Onyango Wuod Omari, and Onyango Jagwasi, the Ken-yan members of the group, probably would never have gotten to tour the United States without Barack Obama's help.

In 2006, the band, which opens for Daby Touré at the Museum of Fine Arts on Wednesday, was scheduled to play a world-music festival in Chicago. But the Kenyans had run into some difficulty with the Department of Homeland Security and were in danger of missing their first chance to play for an American audience.

"A woman named Jenna Pilat from Obama's office - she went into the office at midnight so that she would be there when the embassy in Nairobi opened," remembers guitarist Alex Minoff. "She got on the phone with them, and we were on the phone with our guys, and we were all in touch with each other. And about five hours later those guys walked out of the embassy with their visas, and went home, got their bags, and went to the airport."

Bilongo, Omari, and Jagwasi - who still live in Africa - not only owed their American tour to Obama, but also found that a letter with the senator's signature brought them newfound levels of deference and respect.

"They told us stories about when they went to the embassy," says Minoff. "They went up to the gate, and the guards were like, 'Get away from here.' And they said, 'No, no, we've been sent by Obama. We have this letter from Obama.' And they always tell the story about how the guards retracted in fear. 'Obama? Obama? OK, go in!' "

Extra Golden initially formed when Ian Eagleson, the other American member in the group, was in Kenya for a year in 2004, pursuing research toward a PhD in ethnomusicology. He invited his former bandmate Minoff, with whom he had been occasionally collaborating on songs, to visit, and the pair found sympathetic musical souls in their Kenyan bandmates. "We'd always gotten together and worked on songs together," says Minoff, "and we'd say, 'Man, it would be great if we could do this in Africa at some point!' The African guitar styles were what we really loved."

Extra Golden retains the sun-kissed guitars that are a hallmark of African music, with a slight aftertaste of American rock 'n' roll. With the Afropop sound dominant, Extra Golden still manages to sound noticeably different from other Kenyan artists.

"We are in two groups: There is a group from America and a group from Kenya," says Jagwasi. "We share the ideas, they bring some ideas, and we give out some ideas. So we combine together and make something different."

"Hera Ma Nono" is the result of this sound clash, with four-on-the-floor beats rooting prototypically Afrobeat falsetto guitar riffs on "Jakolando," and chiming Afro-guitar candy dotting the postpunk propulsion of "Street Parade." The album is more African than American, undoubtedly, but "Hera Ma Nono" is not a traditional Afrobeat record, by any means, sounding like Vampire Weekend if the band put down its copy of "Graceland" and bought a ticket for Nairobi.

Having a band separated by the Atlantic Ocean is a complication, but band members make the most of their short time together. This summer's tour will keep them in the same place for more than three months, which will be enough time to play shows, rehearse, write songs, and record a new album.

Judging by the experience of recording "Hera Ma Nono," such time-thriftiness should be no problem for Extra Golden.

"We made [that record] after our first tour, which was in the fall of 2006," remembers Minoff. "Someone would say, 'OK, I have a song, and here's how it goes,' and then we'd play it for a little bit, and then we'd just record it. We were there for five days, and we actually recorded 20 songs."

Cellphones, text messages, and e-mail have made keeping in touch easier than ever, but for these musicians, only being in the same place, on the same stage, allows them to truly communicate. "We don't get to play together, really, except when we have a tour arranged," Minoff says.