Composer saw an opera in 'Onegin' 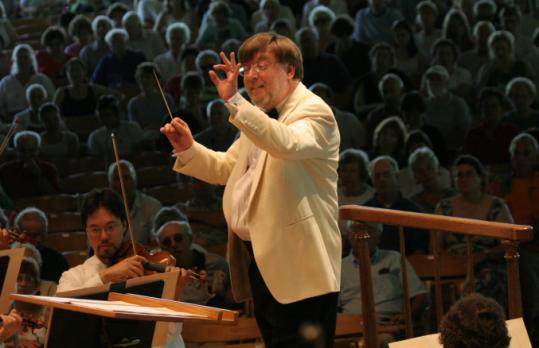 "The core of the piece is all these intimate scenes," Sir Andrew Davis (shown with the BSO at Tanglewood in 2006) says of Tchaikovsky's "Eugene Onegin." (Hilary scott/file)
Email|Print|Single Page| Text size – + By Matthew Guerrieri Globe Correspondent / July 27, 2008

The opera, which the Tanglewood Music Center Orchestra will perform in concert this Saturday, is derived from Alexander Pushkin's celebrated poem. The heroine Tatiana - in one of the most famous scenes in all Russian literature - pens an impulsive love letter to the bored dandy Onegin, who perfunctorily rejects her; years later, filled with remorse for having killed his friend Lensky in a hasty duel, Onegin encounters Tatiana, now a society beauty in a sensible though loveless marriage, and it is his turn to be rejected.

In 1877, as Tchaikovsky became enamored with the idea of an operatic "Onegin," he received a letter from Antonina Milyukova, a former student, professing her love. Tchaikovsky, determined not to echo Onegin's behavior (so the story goes), impulsively married Milyukova, an act that prompted a nervous breakdown and precipitous flight - the union barely lasted three months. In its wake, Tchaikovsky composed "Onegin" with, given the situation, astonishing speed.

Tchaikovsky was conscious of the coincidental similarity between Milyukova's letter and Tatiana's, but he had been considering marriage for some time, as a cover for his homosexuality and a stab at conventional domesticity. And "Eugene Onegin" was, in fact, also a reaction to a very different kind of marriage: the German composer Richard Wagner's fusion of words, music, and visuals into the "art-work of the future."

In 1876, Tchaikovsky joined the throng that descended on the inaugural Bayreuth Festival, the annual ritual devoted to Wagner's operas. Tchaikovsky watched the emperor pass by, caught glimpses of Wagner, and, like the rest of the visitors, suffered the small town's lack of hospitable capacity - much of his reporting consists of sardonically entertaining descriptions of the crowd's desperate quest to be fed.

He also, of course, heard Wagner's four-evening operatic Ring cycle. The scale impressed him; the content, rather less so. "Because in real life people do not, in passing bursts of passionate emotion, sing songs, there cannot be an aria; because two persons do not talk to each other simultaneously but listen to each other, there cannot be a duet," Tchaikovsky wrote. "Wagner, perhaps too readily forgetting that real-life truth and artistic truth are two completely different truths, strives, in a word, to be rational."

It's odd to call Wagner's wildly impractical grandiosity "rational." But Tchaikovsky considered it epic literalism that buried emotion, subsuming melody to the elaborate cage of leitmotifs that, to Tchaikovsky's ear, led Wagner to pile on music where it would have been better to strip it away to its pure dramatic core. Tchaikovsky seized on "Onegin" as an operatic subject because its emotional vocabulary, so like his own, presented an opportunity to be everything Wagner, in Tchaikovsky's mind, was not.

Speaking by phone earlier this week, Sir Andrew Davis, who will conduct Saturday's performance (stepping in to replace James Levine), pointed out that Tchaikovsky didn't even call "Onegin" an opera - the score is designated as "lyric scenes."

"The core of the piece is all these intimate scenes," he says. Even within grand moments, such as the ball scenes, the focus remains on that intimate world. "Especially the last scene," Davis says, the final meeting of Tatiana and Onegin. "Tchaikovsky uses the orchestra in the most forceful way in the piece - it's the one place we actually have balance problems!"

And yet, even that force serves a finely shaded emotional purpose. Tatiana is "almost ready to run away with [Onegin], but he pushes her too hard. He's absolutely wild; up until then, he's been this cynical person, but now he's telling her he can't live without her," Davis says. "The violence of his emotion lets her refuse him."

Wendy White, who has sung Wagner roles at the Metropolitan Opera, and who will sing the role of Larina in Saturday's performance, noted the contrast in dramatic direction. "Wagner goes for the big guns no matter what. Everything is very, very out there," she said. "Onegin is far more thought-provoking, more internal."

For White, that inward focus is key to Tchaikovsky's portrayal of the family dynamic between the dreamy Tatiana, her no-nonsense sister Olga, and their domineering mother, Larina. "Everything is connected with the family, but they know they have to present a positive image of the family," she says.

Larina and her own sister constantly reminisce, reconstructing the past to favorably contrast it with the present. Tatiana's inner life, formed from romantic novels, is an escape from restrictive propriety; it's that conflict, to White, that prevents Tatiana and Onegin from having any chance at a realistic relationship.

"This is how people are," White says. "They want to project to the world a certain life that may not be true." (Certainly Tchaikovsky knew a thing or two about that.)

Though moving between the divergent emotional worlds of Wagner and Tchaikovsky, White approaches the task the same way ("To bring the audience to a place where they feel like they've experienced something rather than just watched something," she says, "then you know you've done your job"). Still, "Onegin" has a particular everyday resonance. "I was working with the score, and my daughter came in, and I was giving her advice - she's about to go off to college, and all that," White reports. "I went back to studying and it was the same thing I was just doing! It's very real even today."

Tchaikovsky would have been proud - he insisted on the virtues of his accurately intimate emotional world. "Only those who look in an opera for the musical re-creation of feelings remote from the tragic and the theatrical - ordinary, simple human feeling," he wrote, "only they will (I hope) like my opera."