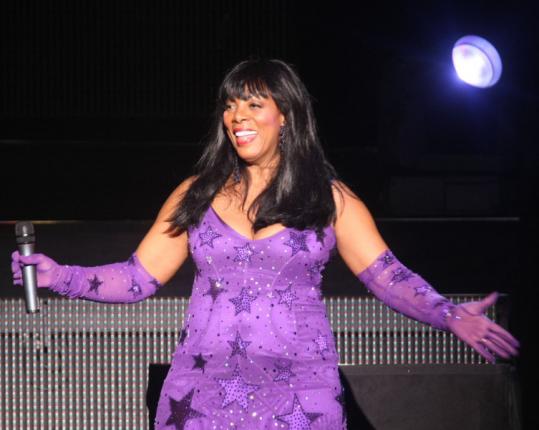 She may no longer be the Queen of Disco, but Donna Summer was received like returning royalty by her hometown subjects at Pavilion over the weekend. Summer herself spared no effort keeping the dream alive, opening with a song called "The Queen Is Back" from "Crayons," her first album of new material in 17 years. "So many years ago/ On the radio/ She crept into your soul/ And loved to love you/ Oh, oh," Summer sang, towering above the minions in a purple sequined gown and gloves, uniformed attendants leaping and flipping in her service.

Disco isn't a genre noted for its depth or longevity, but Summer's material was always a cut above. Hearing "I Feel Love," with its narcotic pulse and sleek synthesizers, was to remember that Summer and her producer Giorgio Moroder were at the forefront of techno, and that their song inspired a thousand icy Euro-dance imitators. Summer, meanwhile, went on to build the most buoyant club catalog of them all.

"If you leave this place not happy then I didn't do my job," she said, launching into "Dim All the Lights." Summer did her job. Joyful "On the Radio," rock-edged "Bad Girls," feminist anthem "She Works Hard for the Money" and the whirling, booming closer "Last Dance" stirred the crowd to euphoria. Smiling, shiny-faced fans dusted off an eye-popping array of choreography, among them one man busting moves in his wheelchair.

Summer, 59, looked and sounded radiant. Her voice has hardly aged, and songs from "Crayons" - a smorgasbord of styles ranging from R&B ("Mr. Music") to adult-pop ("Sand on My Feet") to reggae (the title track) - gave her the chance to stretch her vocals beyond beat-driven belting. The artist has also had the chance to ponder the cost of fame, which she tallied persuasively in "Be Myself Again," a contemplative personal chronicle, and "Fame (The Game)," a cautionary tale couched in a pummeling urban rock track.

The cost of trotting out "MacArthur Park" again and again is a more complex equation, one that toggles precariously between the need to feed the nostalgia machine and the artistic price of resurrecting one the worst songs in the pop canon. Predictably, it inspired Summer's shrillest performance of the set and the night's loudest, longest cheers.

By contrast, one of the evening's high points was a new song, the sassy Southern soul tune "Slide Over Backwards," which found Summer trying on a raspy, Tina Turner-esque croak. She wore it well, and it's especially gratifying to watch Summer - at an age and a career stage when most of her peers are churning out standards collections - pushing the edges of her own envelope.

>Joan Anderman can be reached at anderman@globe.com. For more on music, visit boston.com/ae/music/blog.

At: Bank of America Pavilion, Saturday