Let the light in

With their self-titled debut, Fleet Foxes are putting a new shine on folk music 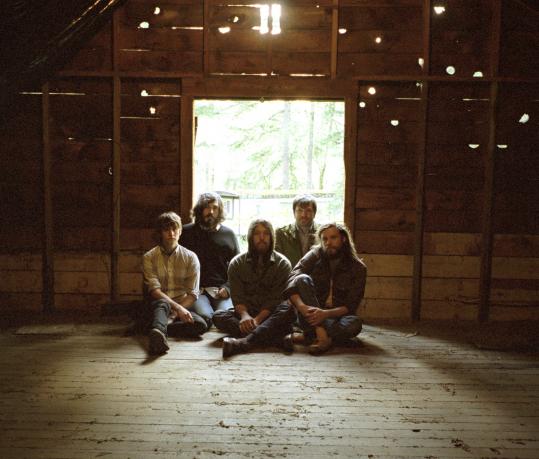 For months, a demon word has been chasing Fleet Foxes across hill and darkened valley from the band's hometown of Seattle to the cramped bars of the Northeast. Hippie. A pejorative built out of pastel and paisley, redolent of Beat spirit, barbiturates, and busted ambition.

"I guess if a guy has a beard, it means he's a hippie," sighs Fleet Foxes keyboardist, mandolinist, and vocalist Casey Wescott, on the phone from a tour stop in Pennsylvania. "We get it everywhere. At some point, I just started saying that I never listened to the [Grateful] Dead growing up. That culture had turned pointless and insincere. Those people from the '60s? They just ended up as yuppies in the '80s."

He pauses, and then adds, "Produced some good music, though. Good tunes."

So, yeah, the men of Fleet Foxes have big beards and sing big-hearted, major-key folk songs about loving the land and the sky and one another, but they are not - emphatically not - hippies. (As for the MySpace greeting, which professes "Endless gratitude & infinite gladness, woah!" [sic] - well, best to ignore that.) What the Foxes are is a hirsute, Technicolor, opposite-of-rock phenomenon, a folk act that's gone from zero to 60 in about a month and a half.

In June, Sub Pop released Fleet Foxes' looping, lilting self-titled debut; a couple of weeks later, it hit No. 1 on the CMJ Radio 200 chart. Some groundswell got going on the music blogs and in the glossy magazines, and pretty soon the Foxes were darting from coast to coast - and every club in between - dealing with what Wescott calls a "pretty dense" schedule. (The band plays a sold-out show at the Middle East Upstairs on Monday; tickets have evaporated at a similar pace in New York, Philadelphia, and London.)

"They're writing in this folk tradition, but there's a good deal of pop to it, so the audience gets those big hooks right away," says Marty Marquis of the folk-rock band Blitzen Trapper. "Robin [Pecknold, the Foxes' lead singer] builds these great melodies. Then in the arrangements, it reminds me of a very classic-rock ensemble."

And yet the Fleet Foxes, Marquis stresses, are not a rock band. He met Pecknold, Westcott, and company earlier this year, when Blitzen Trapper and the Foxes toured together. It was immediately apparent, he says, that "there's this hypnotic element to their music. You just don't generally hear bands sing together that well."

Much of "Fleet Foxes" is patterned, like a patchwork quilt, in rounds of ascending vocal melodies. The best songs, like the spectral hymn "White Winter Hymnal," open with only Pecknold's voice, before stacking guitar and keyboard lines and the thunderous thump of a bass drum. Then, the whole teetering structure is disassembled again, revealing a bare, choral skeleton.

On "Oliver James," a finger-picked acoustic guitar holds up the chorus, before giving way to a threadbare a cappella verse: "Back we go to your brother's house, emptier my dear/ The sound of ancient voices, ringing soft upon your ear."

The thrum of the pastoral "Meadowlarks" is simpler still: "Meadowlark, fly away down," Pecknold chants over a single, sustained vamp. "I hold a cornucopia and a golden crown for you to wear upon your fleecy down."

Much has been made in recent years of "freak folk" - that parade of 20-somethings like Devendra Banhart or Lavender Diamond who channel Vashti Bunyan and dress in frilly pawn-shop chic. The bands, says Marquis, are tapping that "great folk vein. You had, for instance, a guy like John Fahey experience this great resurgence in the Northwest before he died. Now you see these other underground folk artists being unearthed" by younger musicians.

The danger, of course, for Fleet Foxes - and for Marquis' Blitzen Trapper, another band that channels a vintage folk sound - is getting buried in something as simplistic as a "movement."

"I think treating every song differently is the best way to do things," Wescott says. "We've always tried not to constrain ourselves. A lot of the musical decisions are intuitive. We'll start with that main motive of repetition" - the cyclical harmonies - "and then explore from there."

Consider, for instance, "Quiet Houses," the fifth song off "Fleet Foxes," which gallops across a big, uncluttered chorus. Or the soaring "Ragged Wood," thick with reverb and a dozen strands of interlocking instrumental lines, sounding for all the world like a cast-off from the new My Morning Jacket album. These songs, where the whole band joins in to hum, wordlessly, behind Pecknold's vocals, push aside folk convention and embrace a pop aesthetic.

"Look," says Wescott. "You get a lot of bands presenting a lot of different ideas. Some want to save the world or whatever. Invariably they don't. So why not just focus on the music? People will interpret it in different ways, anyway."

The band's live show, Wescott adds, is a good example of what that open-ended mind-set can produce.

"You'd be surprised - a lot of the time, writing and practicing and playing just all happens at the same time for us," he says. "It's a lot of spending time together, having that musical conversation, building a musical relationship. The best songs come out of dialogue."