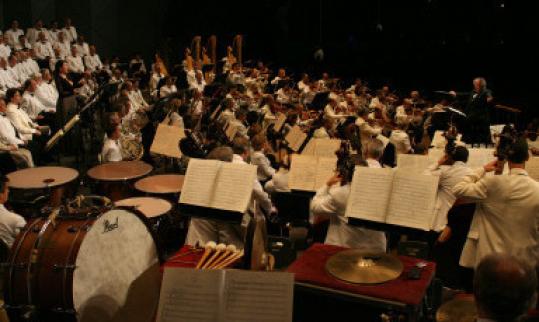 LENOX - There was a 10-foot-tall Trojan horse perched on a hill overlooking the Tanglewood grounds this weekend, but it was only for ceremony, hardly big enough to hold more than one or two orchestra members inside. Berlioz's epic opera "The Trojans" was the real vehicle out of which the Boston Symphony Orchestra stormed this weekend, launching the summer Tanglewood season with a rousing two-part performance of this truly grand 19th-century opera.

It is in fact hard to think of an opera that paints on a vaster canvas than Berlioz's valedictory masterpiece, completed in 1858 and based on his own adaptation of Virgil's "Aeneid." Divided into two parts performed Saturday night and yesterday afternoon respectively, it was the largest opera ever presented at Tanglewood, and credit goes to James Levine and the orchestra for opening the season in such an artistically ambitious fashion. The BSO also closed its spring season with "The Trojans," which made this Tanglewood performance logistically feasible but also perhaps worked against its box office draw. There were empty seats in the shed and the lawn turnout was surprisingly sparse.

Those that were present heard a composer in his finest hour (or four of them). Part I of "The Trojans" tells of the destruction of Troy and Part II picks up the story of the Trojans in Carthage, where their leader Aeneas falls in love with Queen Dido before his destiny drives him onward toward Italy. The music is a sublime compendium of Berlioz's many musical guises, constantly morphing in scale. There are massive full-ensemble numbers in which we hear the destruction of a city, but also exquisitely intimate vocal writing, including a moon-drenched septet in Act IV.

And for an opera in which so much happens, Berlioz still finds room for gratuitously lovely touches completely outside the flow of main events, such as the song of a young sailor yearning for his homeland in Act V. You can almost picture the composer at his desk, eager to stall his own farewell to the Virgilian characters that had inhabited his inner life with remarkable force ever since he was a young boy.

Much of the weekend's performance felt more polished, more deeply grounded, and more vividly imagined than the early forays I heard in Symphony Hall this spring. In Part I, the daunting role of Cassandra was handsomely sung by Anna Caterina Antonacci, a stylish Italian singer whose career has been built almost entirely in Europe. Her voice is not large but she deployed it with terrific subtlety and boatloads of charisma. Dwayne Croft was sturdy and compelling as Chorebus, her fiancé.

Marcus Haddock made a respectable Aeneas with a tenor that was generously scaled and appealing in tone quality, though sometimes short on dramatic presence. Reprising her role from this spring, Anne Sofie von Otter was utterly commanding as Dido, her portrayal building steadily throughout Part II and culminating in a gripping final monologue that seemed to distill the emotional range of the entire opera. The numerous smaller roles were capably filled out by a strong ensemble cast.

The Tanglewood Festival Chorus sang with impressive power and a certain earthy immediacy not often heard in Symphony Hall, with its silk-lined acoustics. Levine was completely in his element, swiveling away on his tall chair and drawing out a focused, supremely clear and well-paced performance. Berlioz's orchestral writing brimmed with drama, elegance, and empathy for his characters' plights. The BSO sounded well-rested and often brilliant. William R. Hudgins floated the big Act I clarinet solo with uncommon grace.