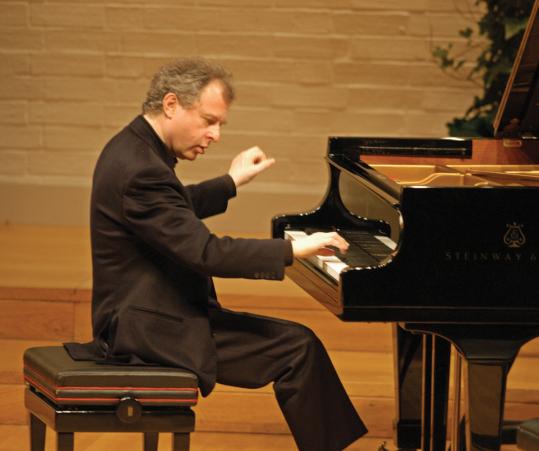 Over the last few seasons, András Schiff has devoted considerable attention to Beethoven, and in particular to the 32 piano sonatas. He has played the complete cycle in several American and European cities, and is recording it for the ECM label.

In addition, Schiff has made a further contribution to Beethoven's legacy. While playing the cycle at London's Wigmore Hall between 2004 and 2006, the pianist gave a free lecture the day before each of the eight concerts, discussing the works to be performed the following evening. The lectures were all recorded and are now available on the website of the Guardian newspaper, one for each sonata (guardian.co.uk/schiff).

It has become routine for performers to deliver brief remarks to audiences during concerts, but Schiff's lectures are something altogether different. Freed from the time constraints of a concert, he offers wide-ranging and substantial explorations, devoting anywhere from 20 minutes to more than an hour to each sonata, seemingly delivered extempore.

Taken as a whole, they constitute an astonishing compendium of Beethovenian wisdom, a kind of spoken treatise from someone who has lived with and thought deeply about this music for years. They also mark Schiff as one of those rare performers - like Alfred Brendel and Charles Rosen - capable of educating about music in addition to playing it.

Schiff's descriptive language is fresh; his turns of phrase, delivered in a broad Hungarian accent, succinctly capture the contours of the music. An especially restless accompaniment in Beethoven's first sonata is "always cooking in the inferno," while an equally tumultuous yet less significant one is "a storm in a teacup . . . it's all in parentheses." And when a large number of notes are assembled above a pedal point, Schiff says, "all the harmonies must swing together."

Everywhere, Schiff hears connections - backward to Mozart and Haydn, forward to Schubert and Brahms. Some of these are well known, others unexpected. He's also adept at connecting seemingly minor details to broad themes. Here he is on the importance of observing Beethoven's accent marks, in his lecture on the Sonata in C major, Opus 2 No. 3: "Those, one has to take dead seriously. Beethoven is not a smooth composer. He is not so much a watercolor painter but rather a great sculptor. You hear surfaces of granite and marble."

Some of the most rewarding lectures are those that focus on the least popular of the sonatas. A talk on the Sonata in G major, Opus 31 No. 1, turns into an extended essay on humor in music. And while many pianists don't bother to even play the so-called "easy sonatas," Opus 49, Schiff devotes 40 minutes of sustained thought to them, covering the finer points of phrasing and dynamic variation, and even the nature of tonality itself. At one point Schiff plays a passage from one of these seemingly unsophisticated sonatas, as the music is about to return to its home key.

"I think all human beings need a sense of coming home," he says. "This is something I very sadly miss in today's music. . . . Because there is no tonal system, to me it's like a foreign language. And this is a language I understand."

My discovery of the lectures coincided with the appearance of the sixth volume of the ECM recordings, released last month. Not surprisingly, these are sophisticated, deeply considered performances. Generally, Schiff seems more attuned to the smaller-scale sonatas, such as Opus 78 and 79. He is less convincing in the volatile "Appassionata," which sounds somewhat studied and deliberate. One revelation is his performance of the F-major Sonata, Opus 54, probably the most puzzling and least loved of the 32. Schiff's playing - slightly slower than usual and with great attention to detail - opened it up in a new way. Not surprisingly, his lecture on it is especially insightful.

"Beethoven is such a revolutionary that he never repeats himself," Schiff says during one lecture. Then he pauses a moment. "Actually, I am beginning to repeat myself," he continues, to laughter from the audience. "You must forgive me - I am not a man of words." How wrong he is.

Boston Baroque has announced its 2008-9 season, which again opens with a semi-staged Handel opera - this time the late masterpiece "Xerxes." Male soprano Michael Maniaci sings the title role; the cast also includes soprano Amanda Forsythe. Other highlights include a concert of works from the French Baroque, and a rare performance of a Requiem by Michael Haydn, Joseph's younger brother.