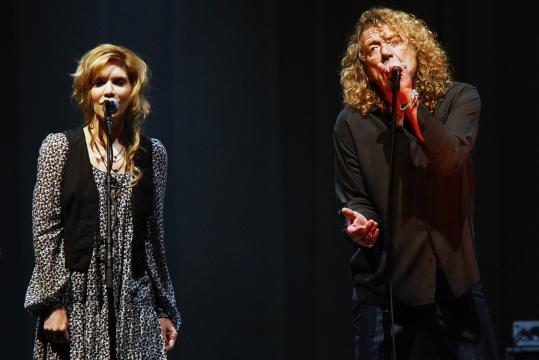 Like couples with nothing in common who fall madly in love, Robert Plant and Alison Krauss make beautiful music together. Thursday night the iconic rocker and the bluegrass superstar performed songs from their 2007 album "Raising Sand," a collection of American classics both vintage and contemporary, as well as a handful of tunes from each artist's solo catalog. Where the album is painstakingly subdued - a dusky wash of deep tones and muted percussion with nary a shimmer or an edge within earshot - the live show was endlessly dynamic.

Plant and Krauss were accompanied by a roots supergroup that included their producer T Bone Burnett (whose dark magic is at the heart of this remarkable collaboration), guitarist Buddy Miller, drummer Jay Bellerose, bassist Dennis Crouch, and multi-instrumentalist Stuart Duncan.

The pair opened with the swampy, late-night blues of "Rich Woman," segued into a fiddle-and-mandolin-stoked thigh-slapper in "Leave My Woman Alone," and proceeded to blow the crowd away with a hauntingly reimagined version of Led Zeppelin's "Black Dog," slowed to a march and configured for banjo and upright bass. Burnett's handprints were all over the arrangement, but Duncan's Jimmy Page-worthy solo - on violin, no less - introduced fans to the sideways sort of heaviness that would color the captivating two-hour set.

Egos were checked at the door. Plant ensconced himself behind a microphone at the back of the stage to sing back-up while Krauss loosed her piercing, crystalline soprano on the Gene Clark classic "Through the Morning, Through the Night," and he formed a close-knit harmony trio with Miller and Duncan during Krauss's sweet, delicate read of the traditional "Down to the River to Pray." Plant blended happily into the dusty musical fabric while she burrowed into gripping, minimalist covers of Sam Phillips's "Sister Rosetta Goes Before Us" and Tom Waits's "Trampled Rose."

Krauss, who has found a new ferocity (and decibel level) in her communion with the rock god, shadowed Plant with equal graciousness, lending mighty harmonies and almost savage fiddle on majestic, organic renditions of the Zep gems "Battle of Evermore" and "Black Country Woman." The Zeppelin fanatics who figured this was the next best thing to the nonexistent reunion tour - and not a few of them peppered the crowd - danced ecstatically.

Burnett took a turn in the spotlight, as well, stepping to the microphone for rousing takes on his own "The Rat Age" and "Bon Temps Rouler."

"We all come from different musical places but this week we lost one of our founding fathers," Plant said before the group launched into a raucous cover of Bo Diddley's "Who Do You Love?" Yet over the course of the evening it became clearer and clearer just how much common ground these seemingly disparate musical forces share. It's in their deep affection for the music's roots - the seminal changes in the Everly Brothers' "Gone Gone Gone (Done Moved On)," and the cosmic mournfulness of Townes Van Zandt's "Nothin'." The latter materialized as a sinewy incantation: Plant howled like an animal, with Krauss baying to his right, and the audience responded in kind.