Fun-loving fans eat up Cake, Cracker, and others at EarthFest 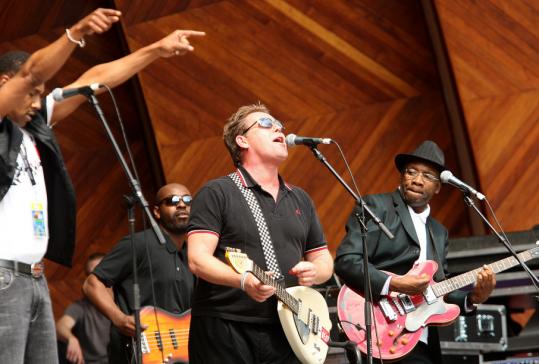 It was a perfect aligning of the planets that Cake, a band as green as they are snarky, headlined the 15th annual EarthFest sponsored by Radio 92.9 (formerly WBOS-FM), Saturday at the Hatch Shell. Not only has the veteran Sacramento band been a staunch champion of environmental awareness - after all, how many rock groups give away trees on stage? - but it's one that has pledged to record its next album entirely with solar power.

Cake's headlining slot also happened to reflect (along with the other main stage performers such as Cracker) Radio 92.9's recent change from a softer adult album alternative format to the (presumably) edgier alternative rock of the past couple of decades. Oh, one other minor detail that made the afternoon such a success: Cake also happens to be very good at what it does. Sardonic and witty, clever and imaginative, it's an outfit that has far exceeded the modest expectations accorded most alt-rock one-hit wonders from the '90s (remember Cake's smash, "The Distance"? And no, they didn't perform it).

Cake frontman John McCrea, clad in thrift-store Florida retiree garb circa 1957 (the sky-blue windbreaker was a nice touch), exuded a coolly droll presence. His aloof, free-associative vocal wordplay was more about speaking than singing. So was it with irony, or a lack thereof, that he led his band through a strangely funky cover of Black Sabbath's "War Pigs," whose epic anti-war lyrics still rang true after nearly 40 years? The band's own semi-hits, "Never There" and "Short Skirt/Long Jacket," both built on blasts of brass and beds of keyboard, were likewise slinky, pungently tasty treats.

There were also some occasionally uncomfortable moments. At one point during Cake's 90-minute finale, apparently in response to the phalanx of two dozen or so police and assorted security staff sternly eyeing the boisterous crowd from the foot of the stage, McCrea sarcastically urged the crowd to "give a big round of applause to law enforcement they're here to protect and serve you!" The exhortation inevitably drew loud boos.

Earlier, midway through Cracker's spirited 45-minute set, a state trooper had clambered on stage and ordered the band to cut short its song, "Teen Angst (What the World Needs Now)," due to the rambunctiousness of the crowd up front. "It's all fun until somebody breaks a hip," quipped Cracker frontman David Lowery. "Seriously, thanks for being a little bit more mellow." (As of Saturday night, there had been no reports of arrests or injuries related to the free concert, according to Massachusetts State Police.)

A superlative early set by the BoDeans (who, in a nostalgic mood, dedicated their 1986 college radio hit, "She's a Runaway," to Boston's indie rockers Scruffy the Cat) went smoothly, as did a jubilant, crowd-galvanizing performance by British ska legends the English Beat. With the Specials' Lynval Golding in tow on guitar, the English Beat's reggae-inflected party music made for 50 minutes of pure bliss. The hits - including the Specials' "A Message to You Rudy" and the Beats' "Mirror in the Bathroom" and "Save It for Later" - came fun and fast.

Aside from Saturday's Hatch Shell lineup, which drew a crowd that was estimated at anywhere from 40,000 to upward of last year's 100,000 people, it was an afternoon of wide-ranging musical highlights. Among those were the Kid's Planet Stage that featured children-friendly songs from folkie Ellis Paul, to the Boston Music Stage that featured up-and-coming local talent such as singer-songwriter Tim Blane, whose light-hearted blend of upbeat pop and soul - not to mention briefly semi-buff presence as he traded T-shirts with a female fan - attracted a few eco-friendly admirers.

At: the DCR Hatch Shell, Saturday