THIS STORY HAS BEEN FORMATTED FOR EASY PRINTING
Classical Music

A Carterpalooza in the woods 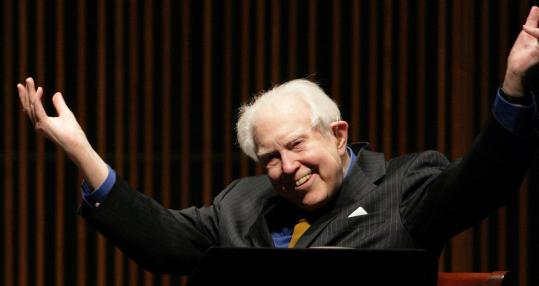 As he nears his 100th birthday, composer Elliott Carter finds that he's busier than ever and writing music with blinding speed. (JENNIFER TAYLOR FOR THE NEW YORK TIMES)
Email|Print|Single Page| Text size – + By Jeremy Eichler Globe Staff / May 18, 2008

"I'm doing fine!" shouts the voice on the other end of the line. The subtext comes through almost as loudly: Why does everyone keep asking me the same damn question!

It's Elliott Carter on the phone from New York, and he's being interrupted again. The 99-year-old distinguished American composer has agreed to a brief interview, but in truth, he really just wants to work. He has entered an improbably, sublimely late phase of his career, and he has been writing music with blinding speed. Work after work flies off his desk. You can't turn a corner in the classical music world without bumping into another Carter world premiere. And now, smack in the middle of it all, he has to deal with a worldwide centenary celebration. Who knew that turning 100 could be such a drag on one's schedule?

Especially with the high style in which the Tanglewood Music Center will be marking the occasion this summer. As the largest event on the centenary map, TMC's entire Festival of Contemporary Music is being devoted to Carter. James Levine is directing, and there will be no fewer than 10 all-Carter programs shoehorned into five days (July 20-24), including three orchestral concerts, two world premieres, and two American premieres. Then there's a movie screening of his opera, a panel discussion, a symposium, and a public interview. It's a Carterpalooza the likes of which the composer has never enjoyed before.

"I think it's extraordinary," he says. "I'm delighted and appalled, and mainly delighted."

Did he just say appalled? "I'm appalled mainly because at this age I would like to go to all of the concerts, but I'm not sure I will be able to. I get tired very quickly."

There's also a deeper sense in which Carter feels he is racing against the clock. "I have a lot of pieces in the back of my head," he says, "so I'm very preoccupied with composing in my last years of my life." He describes his routine of lying in bed every morning and greeting a flood of musical ideas. He then spends the day working them out with pencil and paper, pausing only for lunch, a walk, and perhaps tea with a visitor.

But as he reviews the upcoming festival programs, full of pieces culled from the decades, Carter's enthusiasm seems to build. Hearing his older music, he says, is like looking at a photograph of his younger self. He also loves the fact that many of the performers will be students possibly encountering his music for the first time. Several stalwart Carterphiles will also be performing, including pianists Charles Rosen and Ursula Oppens, cellist Fred Sherry, and composer-conductor Oliver Knussen, who is serving as festival adviser. On July 24, to close the event, Levine will lead the Boston Symphony Orchestra in a program that includes not only Carter's astonishing 45-minute "Symphonia" but the "Boston Concerto," "Three Illusions," and the Horn Concerto.

Speaking of the BSO, Carter can't resist sharing some brief memories. The composer studied at Harvard as an undergraduate in the late 1920s - his letter of recommendation came from Charles Ives, naturally - and he says he attended every single BSO concert in Symphony Hall, often sitting in the rush seats in the upper balconies. As a teenager, he had fallen in love with music "backwards," he explains, starting not with Bach, Mozart, or Beethoven but with an early New York performance of Stravinsky's "Rite of Spring," which convinced him to be a composer. It was only through the later BSO concerts, he says, that he learned "the whole repertory of older music." He also sang in the Harvard Glee Club when it performed frequently with the BSO under Koussevitzky, an experience he describes as deeply influential. "I feel I owe the Boston Symphony a lot," he says, adding with seriousness, "and I have done what I could to repay them."

With that, Carter is on his way. A new duet for violin and cello is calling. "It's something I've never done before - I've never even thought about it," he says, the excitement palpable in his voice. "There's a great work by Ravel of this sort, but I let Ravel be Ravel, and Carter be different."