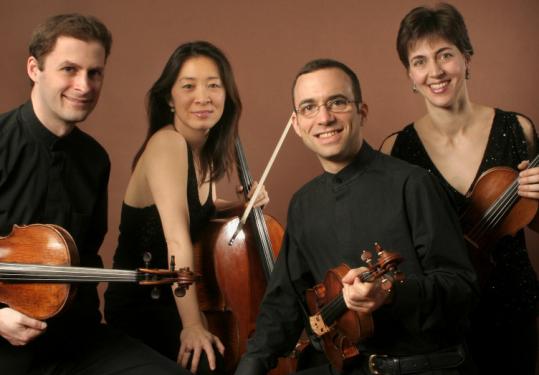 The Brentano String Quartet will be at Rockport's festival. (PETER SCHAAF)
Email|Print|Single Page| Text size – + May 18, 2008

Tanglewood: The big, buzz-worthy events in Lenox this summer are almost all operas conducted by James Levine. Opening the season (July 5 and 6), the Boston Symphony Orchestra will perform Berlioz's epic "Trojans" in two parts, with Marcus Haddock as Aeneas, Anna Caterina Antonacci as Cassandra, and Anne Sofie von Otter returning as Dido. On Aug. 2, the Tanglewood Music Center Orchestra performs Tchaikovsky's "Eugene Onegin" with a cast that includes Renée Fleming, Ramón Vargas, and Peter Mattei. And starting Aug. 9, the TMC Orchestra and vocal fellows perform a fully staged production of Weill's "Rise and Fall of the City of Mahagonny." 617-266-1200, tangle wood.org

Lincoln Center: The most highly anticipated event of this year's Lincoln Center Festival will be Bernd Alois Zimmermann's massive, wrenching opera "Die Soldaten," in a production created for the 2006 Ruhr Triennale and now set to be reassembled in the vast Drill Hall of the Park Avenue Armory (July 5, 7, 9, 11, 12). This year at Mostly Mozart, the ear-opening Finnish experimentalist Kaija Saariaho will be composer in residence, and her new oratorio about Simone Weil will be given its US premiere (Aug. 13, 15, 17) with Dawn Upshaw as vocal soloist and Peter Sellars directing. 212-721-6500, lincolncenter.org

Mass MoCA: The composers' collective Bang on a Can returns to the museum with its summer festival (July 10-26), featuring student concerts in the galleries and performance spaces as well as two larger events: the Bang on a Can All-Stars playing music by Ornette Coleman, Lukas Ligeti, Julia Wolfe, and Evan Ziporyn, among others (July 19), and the Marathon, with a granddaddy of minimalism, Terry Riley, as special guest (July 26). 413-662-2111, massmoca.org

Boston Landmarks Orchestra: Charles Ansbacher's ensemble makes sure there are still concerts to attend in Boston during the summer, and free ones at that. This year the orchestra returns to the Hatch Shell, opening with an all-Copland program (July 9) that will feature Governor Deval Patrick narrating the composer's "Lincoln Portrait." The annual newly commissioned children's work will be "John Adams: The Voice Heard 'Round the World," by Anthony DiLorenzo with a text by Marian Carlson (July 17, 18, and 24; various locations). The subject of the work is the second president of the United States and not, ahem, the maverick American composer. 617-520-2200, landmarksorchestra.org