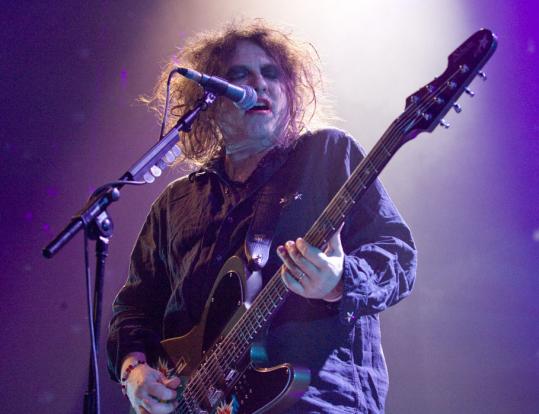 Local Cure fans had a long wait for last night's concert at the Agganis Arena; it was originally scheduled for last September. The veteran British rockers decided to make it up to their patient supporters with a show that looked as if it might last until next September.

The stated reason for the postponement at the time was that Robert Smith and the gang wanted to finish work on a new album. That disc, reportedly a double shot, has yet to appear, but several promising songs from it popped up in last night's generous and often captivating performance.

Sporting a shaggy version of his familiar tangled mop and painted face, Smith was in fine fettle as he and the band, now a quartet, crisscrossed their way through nearly three decades worth of material.

Smith's anguished wail has held up well over the years, and he pushed it to the limit early and often. Without keyboards, his fine guitar work, matched by the keening cries of lead guitarist Porl Thompson, also came to the forefront.

Peaks included a simmering version of "Love Song"; a never-before-played, wah-wah laden rocker, "Sleep When I'm Dead"; and the mesmeric grooves of "Pictures of You."

While the audience and the band seemed a bit logy at points throughout the night, that was unsurprising, given the endurance required on both sides and some technical glitches with Thompson's guitar and the overall sound mix. The mood was never less than contented. Smith isn't much for banter, but with his shy smile and gracious manner was a warm stage presence toggling neatly between extolling the ecstatic heights of romantic bliss on "Just Like Heaven" and reaching into the emotional abyss for the grimy, harder-edged tracks like "Never Enough." as the lights throbbed and swirled in time.

Drummer Jason Cooper and bassist Simon Gallup were a crisp tag-team offering up tight snare fills and hip-moving riffs, picking up the mood in all the right places, whether it was the giddy bounce of "In Between Days" or the off-kilter backbeat of the new "The Perfect Boy."

When we skedaddled to make deadline, the band was 23 songs and two hours deep into a perfomance that would, according to a listener left behind, eventually run nearly three hours and include encores of favorites like "Lovecats," "Friday I'm in Love," and "Close To Me."

While it may have been too much for some, very few of the diehard Cure fans in the packed house could have ended the night feeling they didn't get their money's worth.

The Cure At the Agganis Arena, last night