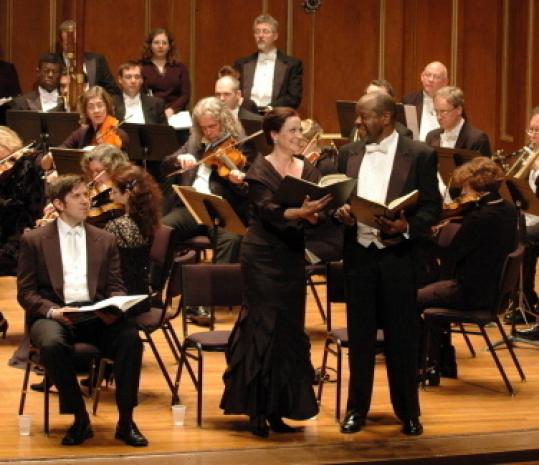 Franz Josef Haydn's "The Creation" is a masterwork, but hardly foolproof; lacking the shaggy, forgiving extravagance of the Handel oratorios that inspired it, the piece can easily cross the line between epic and just plain long. But Boston Baroque's performance on Saturday avoided that pitfall with vibrant color and a fleet momentum that brought out Haydn's architecture.

Tenor Brian Stucki was superb, with a bright, easy tone that maintained sweetness even in heavier moments; he adopted subtle personae throughout, be it his droll reminder to Adam and Eve to stay out of trouble, or the roguish glint in his eye as hell's spirits were cast down. In the central second part, soprano Sari Gruber's ventures toward floating high notes often affected her intonation. But she produced lovely sounds in both her Part I aria "Nun beut die Flur" and as the Eve to Kevin Deas's Adam in Part III, with a clear, silvery voice and an elegant simplicity of phrasing. Deas, a Boston Baroque stalwart, put his melted-butter bass-baritone to varied use, both for avuncular narration and picturesque description; even he couldn't help breaking into a grin after bringing forth worms with a rumbling low D.

Indeed, most everyone seemed to be having a good time. "The Creation" can soar like opera, but there isn't much dramatic tension; Haydn genially closes out the narrative before Adam and Eve have their chance to fall. The piece ends up feeling like a divine wrap party; Pearlman and company made it a vivid, effervescent occasion.