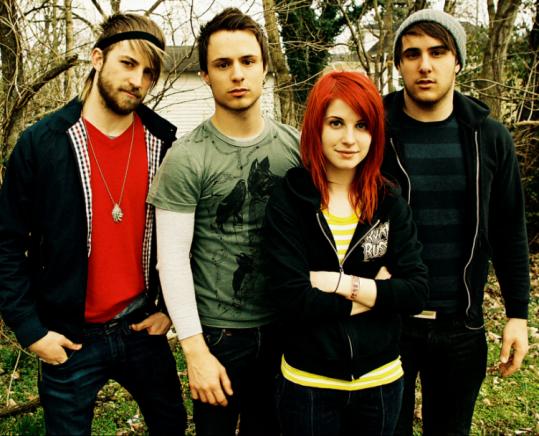 LOWELL - It sounds strange, but emo - that dreadful abbreviation for "emocore," an indie-rock catchphrase that supposedly stood for emotionally driven music (isn't that what all good music is?) - has now lived long enough to mature into adulthood and spawn.

As if to illustrate the subgenre's ability to survive and procreate, both paradigm (Jimmy Eat World) and progeny (Paramore) took turns swapping sob stories and empowerment anthems at a sold-out Tsongas Arena Wednesday night.

Over the course of a 14-year career that began in Arizona just as some of the kids in the audience were being born, Jimmy Eat World has successfully navigated a changing rock landscape by fusing crunching guitar hooks and gigantic shout-along choruses to frontman Jim Adkins's ardent vocal delivery and sincere, boy-next-door charm.

On Wednesday, this formula made blistering, radio-ready songs like "Big Casino" (which opened the quartet's 70-minute set), and "The Middle" (which closed it) sound intimate and even tender. On a glistening "23," the now 30-something Adkins reflected upon fleeting youth. Everybody grows up, even emo, but nobody wants to grow old.

The best songs - the hyperactive pop punch of "Sweetness"; the razor-sharp riffing of "Bleed American" - were forceful, exhilarating, and galvanizing. But occasionally the earnest onslaught grew too familiar, the music sagged under the weight of its self-flagellation, and the band settled into a samey-sounding blare. Mid-tempo plodders such as the boilerplate "Crush" and "Just Tonight" revealed the band's melodic limitations, and the power ballad "Hear You Me" coasted on cringe-worthy references to angels and a trite guitar solo a la Bon Jovi's Richie Sambora (ask your parents, kids).

Jimmy Eat World may have been the headliners, but the second-billed Paramore, a boisterous bunch of Tennessee upstarts fronted by charismatic 19-year-old Hayley Williams, commanded as much attention from the mostly teenage audience - that is, when it wasn't turning the floor into a sweaty, crowd-surfing amusement park.

"We wouldn't be a band standing up here tonight if it wasn't for Jimmy Eat World," said Williams, addressing her peer group and taking a breather from vigorously flailing her dyed-red hair about - a skill almost as impressive as her self-possessed poise and surprisingly powerful voice.

Paramore's main hook besides Williams is the Farro brothers - guitarist Josh is 20; drummer Zac won't turn 18 until next month. But other hooks, bright and sharp, were in the songs, too. The band made the most of its 50-minute slot, jumping right out of the box with the adrenalized pop-punk dramas of "Let the Flames Begin," "Emergency," and "Born for This." Truer words couldn't be spoken.