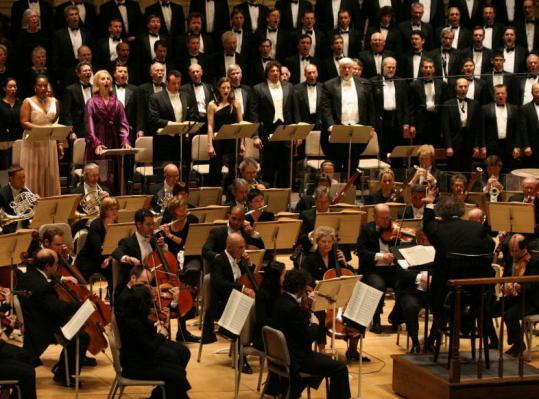 The Boston Symphony Orchestra is ending its current Symphony Hall season with a grand tour. The destination is the ancient world of Virgil's "Aeneid." The vehicle is Berlioz's epic five-act opera "The Trojans" spread out over two weeks of concerts. Last week, in Part I, the orchestra played as Troy burned. This week, for Part II, the action has moved to Carthage, where the love of Dido and Aeneas blossoms before being riven by fate and the call of empire. An evening at Symphony Hall doesn't get more grandly scaled or ambitious than this. And Wednesday night, in an extended three-hour-plus program, James Levine led the BSO, the Tanglewood Festival Chorus, and a fine slate of soloists in an exciting traversal of this sweeping score. It was easily a highlight of the year and a richly satisfying way to cap the BSO subscription season.

With a libretto by the composer, this opera is the culmination of Berlioz's lifelong passion for Virgil, and the music is his crowning achievement. But the work's outsize proportions mean that performances are still relatively rare. The BSO had never performed the score in its entirety.

But there it was Wednesday night, the final three acts in which Aeneas and the Trojans arrive at Carthage just in time to save the city from its demise. The score is packed with gloriously expressive music, but Berlioz somehow never abandons a certain noble elegance and dignity rooted in his admiration for older French operatic traditions.

At the center of Wednesday night's performance was a winning portrayal of Dido by Anne Sofie von Otter. Cloaked in a regal shade of purple, she gave a deeply committed and probing performance as the tragically fated Queen of Carthage - her silvery voice becoming steely and imperious when necessary, or vulnerable and soft-edged as the occasion demanded. Marcello Giordani as Aeneas had moments of impressive heft and ardency, especially in Act V, but seldom displayed the subtlety, finesse, or stylistic comfort one would look for in an ideal Aeneas.

Eric Cutler, Christin-Marie Hill, and Kwangchul Youn were among the fine supporting cast. The Tanglewood Festival Chorus sang brilliantly from memory, with plenty of flexibility and tonal depth. But if this score boasts many rousing choral numbers, it also has a wondrous way of transitioning on a dime from the grandly scaled to the tender and intimate. There are some beautifully serene, delicately tinctured stretches of music in Part II, including the sublime writing in the Act IV Septet, which seems to drift in from another world. It is capped by the billowing love duet of Dido and Aeneas.

Levine was completely in his element Wednesday night, swiveling away in his raised chair, and conducting with a zeal that communicated his passion for this monumental score. He seemed to want to make clear every detail, and the orchestra rose commandingly to the occasion. You will never hear the music this clearly in an opera house with the orchestra playing from inside a pit. There was no action to watch, but Berlioz's music is so vivid, that a good concert performance like this one can make staging seem redundant.