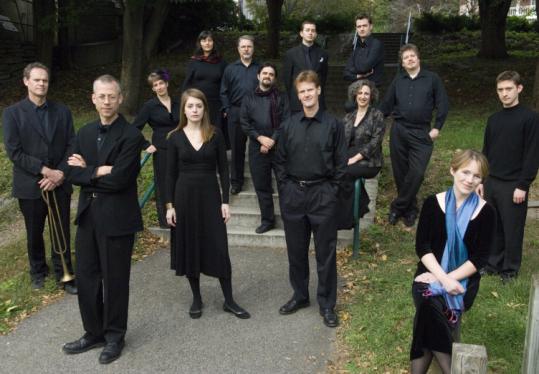 CAMBRIDGE - Scott Metcalfe's Blue Heron Renaissance Choir finished its season on Saturday with an Iberian anthology to accompany the Museum of Fine Arts' "El Greco to Velásquez" exhibit, focused on the artistic patronage of King Philip III's éminence grise, the Duke of Lerma. Older historians regarded the duke as an unscrupulous mooch; recent revisionists have proposed him as a canny, pro-monarchist political innovator. Regardless, and as the expansive program demonstrated, the duke spent freely on musical adornment.

Douglas Kirk, an expert on music of the duke's court, lent his talents both in programming and as part of the Boston Shawm & Sackbut Ensemble. As Metcalfe and the choir declaimed the plainchant "Vexilla Regis" in an upstage circle, the downstage Ensemble answered with instrumental elaborations by Francisco Guerrero and Juan Navarro - the mellow pungency of cornetts, dulcians, and trombones contrasting with the singers' clarion unisons. (Metcalfe made inventive use of a variety of spatial arrangements.)

The choir's warm, organ-like sound, weighted toward tenor and bass, blended wonderfully with the instruments - joined by the Blue Heron Violin Band, in homage to the duke's introduction of violins to Spain - in a pair of anthems by Pedro Ruimonte and Guerrero's now-obscure but then-celebrated student Sebastían de Vivanco; the music showed the Spanish-wide influence of Palestrina, echoing that master's sober balance of vertical sonority against horizontal flow.

Lucas Ruiz de Ribayaz's flowing "Pabannas" (a harp solo for Christa Patton) shifted the setting from sacred to secular, less counterpoint and more syncopation, emulating the theatrical entertainments the duke often arranged. Quartets from the choir gave pure-toned bounce to love songs by Gabriel Díaz Besón and Juan Blas de Castro; the ever-appealing Tom Zajac provided castanet and tambourine drive to a pair of anonymous instrumentals, for which violinist Julie Andrijeski put down her bow and put on her historically informed dancing shoes.

After intermission it was back to church. A "Magnificat" by Vivanco unfolded with confident piety; Antonio de Cabezón's intricately embroidered organ fantasia "Ultimi miei suspiri" (played with subtle rhythmic fluency by Peter Sykes) introduced a set of works composed for Holy Week by Vivanco and Alonso Lobo, another of Guerrero's students. A blast of shawms lent some bite to the finale, Tomás Luis de Victoria's "Victimae paschali laudes," but the overall atmosphere was one of lavish austerity and solemn, impressive gravity.

As the first half's dances lingered in memory, one could imagine the duke's retinue at Sunday Mass - the music draping the church like a heavy tapestry, their minds wandering to the previous night's revelry.