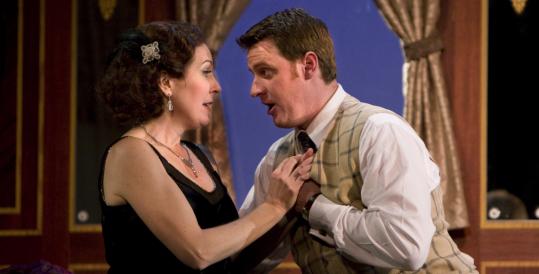 If a slack pace is the enemy of comedy, then one can't fault Boston Lyric Opera for putting the whole of Mozart's "The Abduction from the Seraglio" on an express train. To complain that a transfer of setting from pre-Enlightenment Turkey to the 1920s glamour of the Orient Express robs the opera's plot of plausibility is to assume that the plot had much plausibility to begin with.

"Abduction" is perhaps the ultimate anti-verismo opera; instead of revealing the boiling passion beneath everyday life, Mozart whips some of the most fraught archetypal conflicts - East vs. West, Islam vs. Christianity, male vs. female - into a sweet confection.

The production (like many in opera these days) is as traveled as its setting. Director James Robinson first put "Abduction" on rails for Wolf Trap in 1998; this version, previously mounted by BLO in 2002, is a co-production with companies in California, Colorado, Houston, Kansas City, and Minnesota.

Allen Moyer's impressive passenger-car simulacrum set, letterboxed by a giant map of the train's journey, makes a horizontal "Upstairs, Downstairs" distinction between the two servant-master pairs - the standard-hero Belmonte and his servant Pedrillo, Belmonte's beloved Constanze and her maid Blonde. Robinson has streamlined (and modernized) the spoken dialogue, and filled Mozart's repeated melodies with plenty of activity. While much of the physical comedy was choreographed too deliberately for effective impact, a drunken tête-à-tête between Pedrillo and Osmin, the work's blustering villain, had anachronistic sparkle, and the second act quartet finale made nice split-screen use of the train's multiple compartments.

But the busyness became a distraction in Constanze's epic Act II "Martern aller Arten," where Robinson turns threatened "torments" (as rendered, and sung, in Andrew Porter's translation) into temptations, silks and furs that Constanze's captor, Pasha Selim, drapes about her throughout the number. A de facto concerto in scope and architecture, the aria - the opera's decisive vote for musical grandeur over dramatic momentum - needs no directorial apology.

David Cushing made Osmin more a figure of fun than menace, but his bathyspheric bass is a marvel, and he put his towering stage presence to gleeful use. In the non-singing role of Pasha Selim, Jim Spencer had both cosmopolitan elegance as well as tightly wound tension; this was a Pasha for whom mercy is a desire, almost a habit, but nowhere near a reflex. Conductor Willie Anthony Waters drew a polished sound from the orchestra - well-balanced, plush depth - but his rhythms were square and verging on stolid, neither a flexible canvas for the singers nor a headlong rush.

Still, the singers carried the day. The Turkish theme that Mozart seized on was a formulaic staple of the time, an excuse for exotic settings, elaborate costumes, some extra percussion in the pit - and some of his most impractically rich music. If BLO's staging is often not much more than the operatic equivalent of making the trains run on time, it's at least true to the original's intentions.