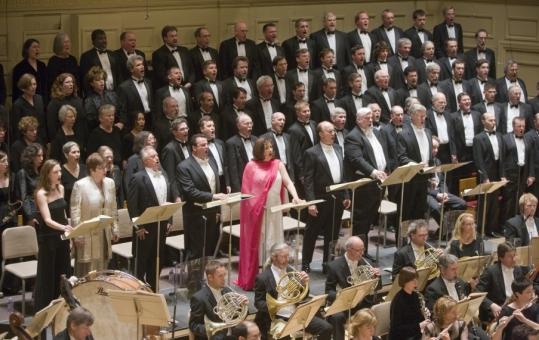 When it comes to Berlioz, the Boston Symphony Orchestra has a performance tradition that few ensembles could rival, but even with that rich history, the BSO had never performed more than excerpts of the most ambitious and grandly conceived work in the composer's catalog: namely "The Trojans," his sprawling grand opera based on Virgil's "Aeneid."

That is until last night, when James Levine led the orchestra, soloists, and the Tanglewood Festival Chorus in a performance of Part I of this epic score. Part II comes next week, and then both parts will be performed on May 4 to close the Symphony Hall season.

On paper, this has long seemed like a supremely ambitious and exciting way to cap the season, extending the orchestra's Berlioz tradition and playing to the strengths of a music director who has passionately championed this score. In practice, last night's performance was forceful yet rough-hewn and somewhat unsettled, giving only glimpses of the excitement this event should ultimately deliver.

Completed in 1858, "The Trojans" was the culmination of Berlioz's lifelong obsession with Virgil, and the composer's own libretto distills the 12 books into a five-act opera with two parts: "The Capture of Troy" and "The Trojans at Carthage." The kaleidoscopic score is a dazzling summary of the composer's many styles, but on a more basic level, it is a meeting of the fire and expressive passion of his archetypal Romanticism with the clarity, elegance, and dignity of older French operatic traditions.

The hero of last night's outing was the Tanglewood Festival Chorus, which sang, from the outset, with unflagging energy, commitment, and focus. The expansive contours and sheer tonal force required for the score's massive climaxes were all present, but so were the delicacy and transparency necessary to bring across passages such as the beautifully tender prayer sung by the Trojan women at the outset of the second tableau of Act II.

The soloists were a more mixed bunch. Yvonne Naef, as the prophetess Cassandra, has the most prominent role and she sang it well, with a powerful, rich-toned mezzo that conveyed the anguished plight of her character, who foresees Troy's demise but is unable to alter its destiny or even save her own fiance, Chorebus. In that role, the baritone Dwayne Croft soldiered gamely, but, as announced from the stage before the performance, he was battling a serious cold and it took a toll. Marcello Giordani has a pleasingly sweet-toned tenor but he seemed at times tentative and underpowered as Aeneas, reviving memories of his weak showing in Berlioz's "Damnation of Faust" at Tanglewood last summer and on tour in Europe.

Under Levine's baton, the orchestral playing was rougher around the edges than usual but there were some exhilarating moments, including the finale of Act I, with its majestic offstage brass fanfares that signal the approach of the wooden horse into the city. William R. Hudgins played the expansive Act I clarinet solo with tonal refinement and abundant grace. It is evident that Berlioz's slumbering giant is not easily awakened, but it should be fascinating to see how this massively scaled project unfolds in the coming performances, both at Symphony Hall and at Tanglewood, where "The Trojans" opens the season on July 5.