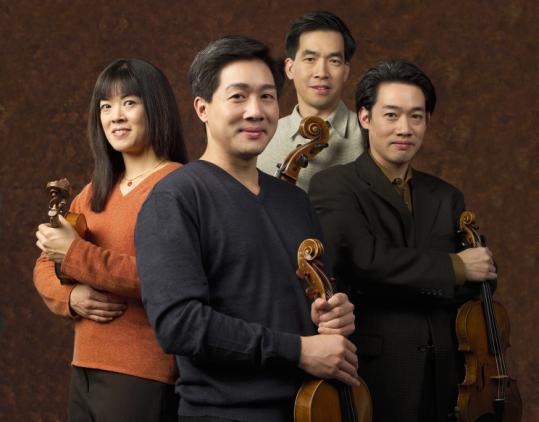 From left: the Ying siblings Janet, Phillip, David, and Timothy have been artists in residence at Harvard since 2001.
Email|Print|Single Page| Text size – + By Matthew Guerrieri Globe Correspondent / April 21, 2008

CAMBRIDGE - "Three marriages and three babies": From the Paine Hall stage, Phillip Ying tallied up a few of the Ying Quartet's souvenirs of their tenure as the Blodgett Artists-in-Residence at Harvard University. Since 2001, the siblings - violinists Timothy and Janet, violist Phillip, and cellist David - have spent four weeks annually on campus offering coaching, readings, master classes, and concerts; Friday's valedictory performance was appropriately centered on historical introductions and goodbyes.

Ludwig van Beethoven'sOp. 18, No. 3 Quartet in D major was, numbering notwithstanding, his first full-scale essay for the ensemble, his own insistent musical personality already bursting through a Haydnesque veneer. The Yings spent most of the piece finding their footing, both tonally and rhythmically; even in the Presto finale, their modest but omnipresent rubato took the edge off Beethoven's drive, the tempo crossing the line from flexible to wayward.

But they returned in exquisite form for the complete string quartets of Igor Stravinsky (that composer having only contributed some 20 labile minutes of music to the genre). The group's detailed, close-knit phrasing ideally parsed the condensed, experimental discontinuities of the "Three Pieces" Stravinsky in 1914, venturing out in new, post-"Rite of Spring" directions - while their calibrated sound, rich cello and viola anchoring lean violins, lent depth to the more expansively asymmetrical grooves of the neo-Classical "Concertino." In between was Stravinsky the serialist, the brief "Double Canon," a 1959 memorial to the French painter Raoul Dufy. Such strict 12-tone counterpoint might seem an odd tribute to Dufy's Fauvist exuberance, but the beautiful rendition revealed an affinity: an eloquent lament, rendered with a few simple, clear strokes.

After intermission, violist Roger Tapping and cellist Natasha Brofsky joined the quartet for a fiery reading of "Verklärte Nacht," the young Arnold Schoenberg's singularly hyper-Romantic walk in the park. The players exhibited the sort of cascading intensity at the heart of the best chamber music; in place of smooth homogenization was the volatile flow of individual interaction, a live performance in the best sense of the phrase. It suited the work's unusual combination of elegy and impatience: resplendent harmonies summarizing the post-Wagnerian tradition while their intricate construction intimates Schoenberg's subsequent revolutions. Looking forward while looking back - an ideal graduation.