Trio demonstrates collaboration in the midst of contrasts 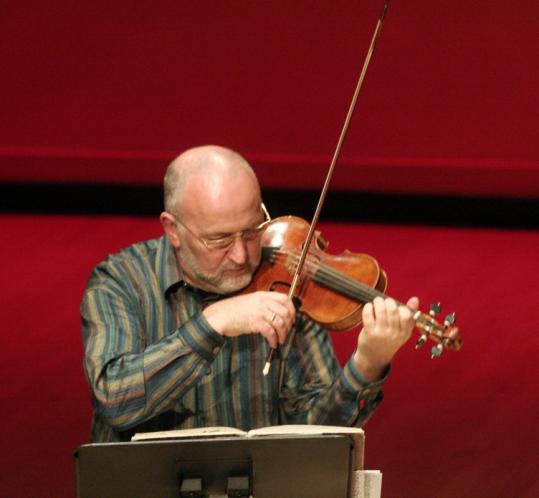 Francesco Maria Veracini took a different tack, augmenting Corelli's musical vocabulary with imaginative extravagance. The 12th and final of his Op. 2 sonatas builds each movement around a repeated, descending figure - chromatic in most cases, except for the sturdy four-note diatonic staircase of a traditional "Ciaccona" - engendering a rich profusion. (The "Scozzesse" from the ninth Sonata made a bewitching encore.)

Music of Jean-Marie Leclair anchored the Francophile first half, marrying Italian rhetoric to his own French school of violin-playing. His Op. 5 No. 1 Sonata prioritizes poise: Even the finale's driving passagework pulls into an unexpectedly graceful final cadence, a hornet alighting like a butterfly. Op. 5 No. 4 showcased Holloway's violin with the sort of technical challenges one of Leclair's contemporaries described as "a kind of algebra," though the final "Chaconna" - using the same four-note bass as Veracini - was a more restrained machine than Veracini's high-performance Italian engine.

Unlike Leclair or his court predecessor François Couperin (whose undulating harpsichord-solo "Les Barricades Mistérieuses" had a cameo), Joseph Bodin de Boismortier sold his music to the public rather than relying on royal patronage. His A-minor Trio (Op. 37, No. 5) was the evening's most modern-sounding piece, its three-movement structure anticipating the Classic era, some startling stoptime rhythms in the last movement looking forward seemingly further.

The fluent ensemble attested to the performers' longstanding collaboration. Most noteworthy was the rhythmic flexibility, tempos in subtle flux without a sacrifice of momentum.

But not a small part of the entertainment was the contrast in physical demeanor: Holloway's nobility, Mortensen's rag-doll expressivity, ter Linden's genial calm - a lion, a scarecrow, and an agile tin man, off to meet a host of Baroque wizards on happily equal terms.