Domingo picks up a mantle (sort of) 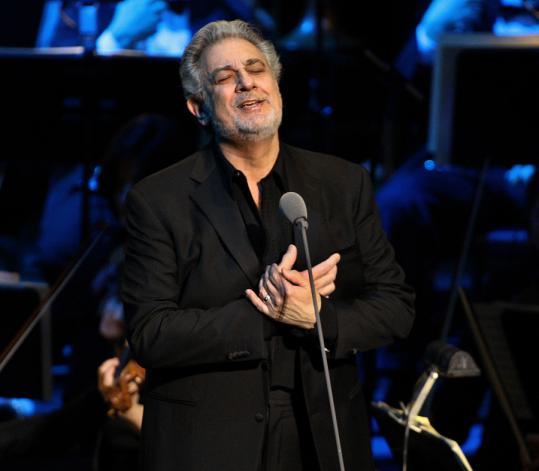 Placido Domingo has no shortage of channels through which he can connect with his adoring public. But the tenor seems at least partly inclined to pick up the populist mantle of Pavarotti, and he has now embarked on an "Around the World" tour. In truth, it's more like a scattering of occasional solo concerts in various cities that Domingo will be fitting in around his other commitments. The tour website shows only one US city at the moment: Boston.

And there he was last night at the Wang Theatre, in an evening that couldn't decide whether it was a full-fledged arena-style crossover gig or a more sober, buttoned-down affair with its own artistic aspirations. Domingo seemed to want it both ways. Right from the outset he invoked the spirit of Pavarotti by dedicating his first selection from Massenet's "Le Cid," to the late tenor's memory.

But the concert also showed an implicit ambivalence toward the Pavarotti legacy. Compared to a Pavarotti arena program I heard in Madison Square Garden in 2000, this evening had at once less electricity and more artistic integrity. (It's worth noting here the recent revelation that Pavarotti lip-synched one of his final performances, at the 2006 Turin Olympics.)

Even if he did not whip the crowd into a frenzy, at least before the night's deadline forced me to leave following the first encore, there was a lot of intelligent and deeply committed singing with Domingo, at age 67, in remarkably healthy voice. On the first half, among others, Domingo delivered the selection from "Le Cid" and one from Francesco Cilea's "L'Arlesiana," with his trademark heft, power, and smoothly burnished tone. He was backed by an over-amplified orchestra of local freelancers, conducted by Eugene Kohn.

And while it was billed as Domingo's first-ever full concert appearance in Boston, the program was shared with the Puerto Rican soprano Ana María Martínez, who sang almost as many solo numbers as Domingo did. Her selection from "Madama Butterfly" was tentative and with slightly pinched top notes, but her singing grew stronger on the second half, which also featured Domingo's unpersuasive yet still somehow endearing attempts at Broadway standards.

Without a doubt, both singers were at their best in the handful of zarzuela selections on the evening's program. Domingo grew up with this music and when he finally left behind "West Side Story" and "South Pacific" for the land of Federico Moreno Torroba's "Maravilla," his voice, his body language, and his music-making all seemed to open up and breathe a sigh of relief. Martínez, too, sang with much more flair in this material. The entire evening should have been given over to zarzuela repertoire. That would have been something to see.