Levine, Kissin, and Brahms at BSO 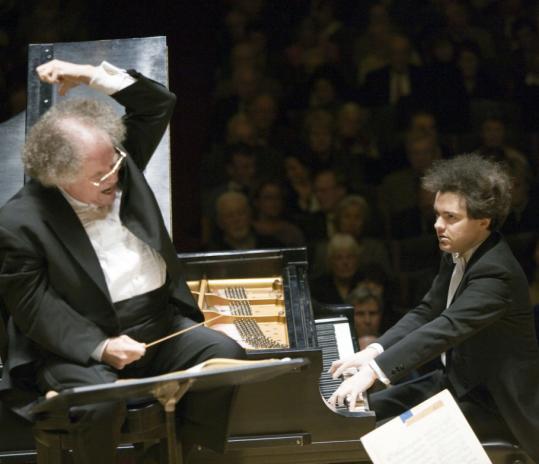 It was heartening to see a sold-out house at Tuesday night's Boston Symphony Orchestra performance in Symphony Hall. In fact, all four concerts this week are sold out as the program seems to have found that box office sweet spot with its combination of admired performers (James Levine is on the podium, with Evgeny Kissin as the piano soloist) and much-loved repertory (Brahms's Symphony No. 3 paired with his Piano Concerto No. 2 Tuesday and last night, and with his Piano Concerto No. 1 tomorrow and Saturday).

But let's hope the BSO does not draw the wrong conclusions from this. Specifically, there was the nagging feeling of déjà vu again Tuesday night, since the orchestra played every note of this music just last season, and in fact, this week's final two concerts feature the exact same pairing of works that Bernard Haitink conducted last April and May in Symphony Hall. This is hard to justify, at least on artistic grounds. Even if we bracket the wish, often expressed by critics, that ensembles lean less heavily overall on the standard repertory, most major orchestras at least try to vary the menu of masterpieces they offer - and even more importantly, the context in which they offer them - from one season to the next. The BSO's audiences certainly deserve this, too.

As for the concert itself, there was plenty to enjoy on its own terms. Levine led a richly textured and surely paced account of Brahms's Third Symphony, if not with the same rhetorical cogency and overarching expressive tension that he has brought to other Brahms symphonies in recent memory. Tuning in the winds and brass was also intermittently fuzzier than usual. The outer movements had a strong rhythmic profile and an appealing heft; the strings exuded the beautifully dark and warm tone that has become a signature of the orchestra's Brahms.

After intermission, Kissin gave a commanding, steel-fingered rendition of the Second Concerto, full of tightly coiled energy and explosive runs. His nimble, spry, and highly virtuosic playing seemed most closely attuned to the work's declarative and heroic qualities, and less so to its elusive crosscurrents or its hidden pockets of lyricism, though there were some moments when he lightened up to produce a beautifully liquid tone. Overall, his performance was the sort that grabs you by the lapel to demand your attention, rather than the sort that more memorably charms you into drawing near.

The piece itself is of course symphonic in its dimensions and the orchestra here was in excellent form. Most notable was Jules Eskin's golden-hued cello solo in the andante movement, a fountain of tone originating from somewhere deep.