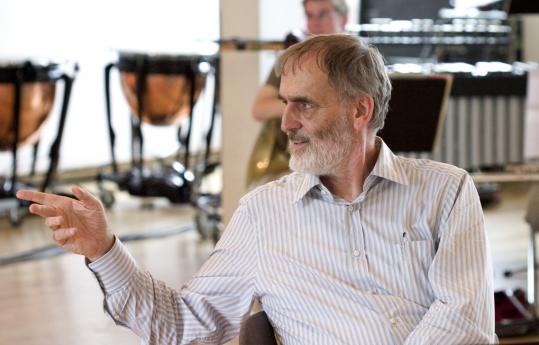 One day in the dark winter of 1942, as the Battle of Stalingrad raged to the east, an 8-year-old German boy sat at home in Stuttgart, huddled with his family by the radio. He listened as the Nazi propaganda minister Joseph Goebbels extolled the sacrifices of German soldiers who had fought bravely for the Fatherland. They were, Goebbels said, helping to bring about the ultimate victory of the master race. He finished his speech with a ringing call for German solidarity in wartime. And then, as if to underline his message, the broadcast cut directly to a stirring performance of Beethoven's Fifth Symphony.

The little boy by the radio was Helmut Lachenmann. Today, at 72, he is probably the most highly regarded German composer alive. The scene in his childhood home was seared into his memory. So was the close association between the grand German musical tradition and fascism.

He was not alone in pondering this link. In Thomas Mann's wartime novel "Doctor Faustus," a fictional modern composer tries to "take back" Beethoven's Ninth Symphony. Lachenmann read the book as a schoolboy. With all of this floating in the air, it was little wonder that he and many in his generation of postwar avant-garde composers avoided writing symphonies altogether. Instead, he sought to generate new forms, new ways of listening, new definitions of music. In the late 1960s, he began fashioning his work from the raw material of acoustically produced noise, that is, the odd or ugly sounds that traditional instruments had almost never been asked to make. He shaped them into a masterfully strange, crepuscular music: tense, hyper-aware, quietly disquieting, at times maddeningly opaque but also with moments of improbable beauty. In his more recent work, fractured slices of music's past float by at a surreal distance, like a familiar landscape glimpsed through an inverted telescope.

Lachenmann is a revered figure in his native Germany today, and his music seems so grounded in his country's 20th-century narrative that it's hard to picture him anywhere else. And yet, strange to say, when you dial the composer's German mobile phone these days, it rings just across the river in Cambridge. Lachenmann is the Fromm visiting professor at Harvard University this semester, and his presence has been quickening the pulse of musical life both on campus and off. Student composers have been flocking to his seminars and lectures. A local admirer has been writing poems in his honor. And his restless, quivering, still-controversial music - in this country, typically heard about more than heard - has been turning up on concert programs all over town. On Wednesday evening, a free all-Lachenmann performance will take place at Harvard's Paine Hall, with the Parker String Quartet, Michael Norsworthy (clarinet), Stephen Olsen (piano), and David Russell (cello).

A few weeks ago, a youthful crowd packed into the parlor space at the Goethe-Institut of Boston to hear the Chicago-based JACK Quartet perform Lachenmann's First and Third String Quartets in the composer's presence. There was an air of anticipation. The man next to me announced that he had never heard a note of Lachenmann's music but that he was prepared for anything that didn't take the enamel off his teeth.

About a half-hour later the expression on his face suggested that maybe he was not so prepared after all. The audience had just experienced "Gran Torso," the composer's first quartet written in 1972, a time when he was moving beyond serialism to seek a freshly independent path. In that spirit, the quartet is built entirely of the non-traditional acoustic sounds that would become his trademark.

To produce the sounds, the JACK players sawed away with extraordinary precision at just about every part of their instruments. They played beneath the bridge, on top of the bridge, on the side of their instruments, and on the tailpiece. They floated their bows to produce a barely audible surface noise that could be mistaken for an airplane passing in the distant sky. They also pressed their bows into the strings with extreme pressure to produce a kind of sharp-edged tearing sound, a bit like wood splintering in slow motion.

Even when people know what to expect, Lachenmann's music is a challenging ride for everyone involved, including the players. In 1986, the German orchestra that commissioned Lachenmann's "Staub" refused to give its premiere. To the uninitiated, the music might at first come across like a prank or a Duchampian provocation, as if the composer were tempting you to call his bluff. But he is deadly serious. And if one can momentarily suspend the rush toward skepticism and simply open the ears to the experience at hand, curious things begin to happen.

In the case of the First Quartet, a coherent sense of narrative slowly begins to emerge from the weird menagerie of scrapes, rustles, and sighs. It becomes clear that the sounds are not strewn at random but plotted by the composer with uncanny precision. The ear begins to detect a sense of rhetoric, and an expressive tension in the music. In a live performance, there is also a sense of visual theater, as one watches the strange ways the gestures are produced. It's as if the music is releasing the instruments' own darker thoughts, the raw noise-material stored up, repressed, over all of the years of producing pure unblemished tone.

The audience at the Goethe-Institut listened to the First Quartet in rapt silence and the applause afterward was vigorous. The Third Quartet, which will also be performed at Wednesday's concert, came across with equal success. The earlier music had cleared the channels, like a kind of wheatgrass shake for the mind, so in the Third Quartet, when Lachenmann sprinkles some actual pitched notes amidst the rasps and whispers, they sounded like a revelation. If only for a moment, the composer had made one listen differently.

A few days later, the courageous new music band known as the Callithumpian Consort cast a similar spell on the stage of Jordan Hall with a riveting performance of the composer's ". . .Zwei Gefühle. . ." ("Two Feelings") conducted by Stephen Drury. The piece is written for chamber orchestra and was incorporated in the 1990s into Lachenmann's darkly enthralling opera "The Little Match Girl," after the Hans Christian Andersen story. Here again, unusual techniques abound, as when the tuba player is asked to channel his blast of sound directly into exposed innards of a grand piano, creating an extra cloud of resonance.

Mixed into the pristinely wild orchestral nightscape was a halting narration delivered in German by the composer himself. The words were from a text by Leonardo Da Vinci on the topic of exploring caves. The "two feelings" of the work's title are those that confront the explorer: "fear of the dark and threatening cave" coupled with "desire to see if there were not some mystery within."

For all its dreams of terra incognita, its ability to both remember and drift free of the past, Lachenmann's music is a product of a very particular time and place. After World War II, difficult 12-tone music enjoyed a certain cultural prestige - and generous state funding - precisely because it had been so vociferously attacked by the Nazis. Championed in places like Darmstadt, Germany, this music reached previously unimagined levels of complexity. It also engendered a massive backlash from mainstream audiences, and from composers who found in it a rigid aesthetic orthodoxy.

Lachenmann was deeply influenced by this world but also prodded it from the inside. When he first came to Darmstadt in 1957, he gravitated toward the composer Luigi Nono, who later became his teacher, precisely because Nono was still interested in addressing tradition in some way. In the 1970s, when Lachenmann began inventing the techniques used in the First Quartet and many other works, he purposefully chose to generate the noises acoustically, using the actual instruments of the orchestra rather than the electronic methods that were fashionable at the time. He grasped early on that his works would lose much of their unsettling power if the music poured out disembodied from loudspeakers, generated by a computer. Even a language reinvented as new had no choice but to define itself in reference to the past.

Today, the fierce debates of 20th-century music, its attempted ruptures with the past, are themselves part of history, and the high-modernist aesthetic, while still alive and kicking in places like Boston, has lost its position of de facto cultural supremacy. Young composers face a stylistic world in which anything goes. The risks too have migrated. If it was once attacked as contemptuous of audiences, new music today frequently comes off as overly eager to please, rushing to join its listeners with wide open arms rather than seeking to lead them someplace new. This is in part why, precisely now, it's so refreshing to encounter a radical, rigorous voice like Lachenmann's, one that is still capable of jolting the ears, disturbing the peace, forcing you to listen in new ways.

It's also worth noting that Lachenmann is said to be a generous and non-dogmatic teacher, one who does not try to make his student's music sound more like his own. In person, he is a sympathetic explainer of his music, even in his halting English. After a lecture at the Goethe-Institut in which the full battery of his instrumental squeaks and scrapes had been demonstrated, he ended with a simple and disarmingly humble request: "Try to like it," he told the audience. The line has been picked up by some student composers at Harvard, who have made it their own.

Up in the tower

After the recent weeks of attending live performances, listening to recordings, and reading his polemical essays, I paid a visit to Lachenmann himself at the Harvard music department, where he has been teaching two courses. The great man could be found in the departmental copy room, looking slightly befuddled by all the machines. We walked to his office, ascending two flights of stairs, though the distance somehow seemed far greater. Inside, the shelves were largely empty of books but full of his own scores piled up in neat stacks.

I do not know whether Lachenmann has mellowed with age, but in conversation, there was little trace of the muscular and severe personality that comes through in his writing. He did offer some gratifyingly Adorno-esque pronouncements about our oppression at the hands of superficial mainstream culture. And with a playful glint in his eye, he declared that every concert in Boston should open with a performance of Anton Webern's Five Pieces for Orchestra, a seminal work of European modernism, "just to remind us that we have ears!"

But most striking of all was the hunger for exploration that seemed unabated in this man of 72 years. Even though the contours of his own style are by now established, he said he was eager to help his students, regardless of their aesthetic orientation, find fresh directions and avoid facile formulas.

"It's a bit like there's already a vehicle called avant-garde music, and people just want to sit in the vehicle and make a trip somewhere," he said. "I try - I don't know if I succeed - but I try to rebuild a special vehicle for each new piece, to have the intensity to always search in each piece to reinvent the idea of music."

"It's like Robinson Crusoe on the island," he explained. "To learn how to survive, he had to begin from the beginning."