Edwards sings about heartache and talks about hockey 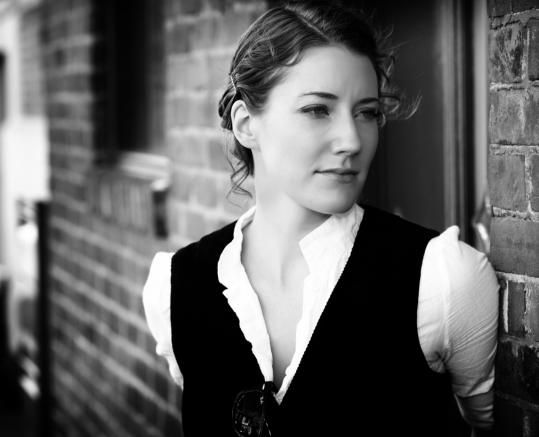 Take the tough-but-tender pedal steel country of Emmylou Harris or Lucinda Williams, blend in the melodic folk-rock of Jackson Browne, then add a dash of the mournfulness of early Neil Young and you get a taste of the winning talent that is singer-songwriter Kathleen Edwards.

Edwards is touring behind her new album, "Asking for Flowers," and a packed house at the Paradise Friday night was already converted when Edwards strolled out with her acoustic guitar, dressed casually in a simple white blouse and jeans, and acknowledged the enthusiastic reception. "I think I recognize all of you," she joked.

Juggling guitars and harmonica, Edwards led her band through a fine set of new and older material, her plaintive, girlish voice richer and warmer than on record, where she can sound warbly and overpowered by the music.

The ballads captivated: "Scared at Night," a haunting duet with opener Justin Rutledge that reassured a dying loved one everything's going to be OK; the lost-girl lament of "Alicia Ross"; and "Sure as [Expletive]," which warns a lover leaving town he better not stray if he wants to come home.

When Edwards sang about love, loss, and regret, as she did on "What Are You Waiting For," she wasn't afraid to get angry, yet she made her saltiness seem entirely reasonable. ("It's been years and you're still mad/ You say you like me in your memory/ You've got to be [expletive] kidding me.")

Edwards opened "I Make the Dough, You Get the Glory" by charming the crowd with some playful chatter about hockey and how excited she is about having former Bruins bruiser Marty McSorley and Wayne Gretzky in her next video. She even handed out cookies shaped like the logo of her hometown Ottawa Senators.

A preponderance of loping, mid-tempo rockers dampened the energy of the nearly two-hour set. But the raucous, rockabilly-flavored "Back to Me" was a fan favorite, closing out the night on a high as a feisty Edwards gleefully traded guitar solos with her husband, the talented Colin Cripps.