Over the long haul, these Truckers deliver 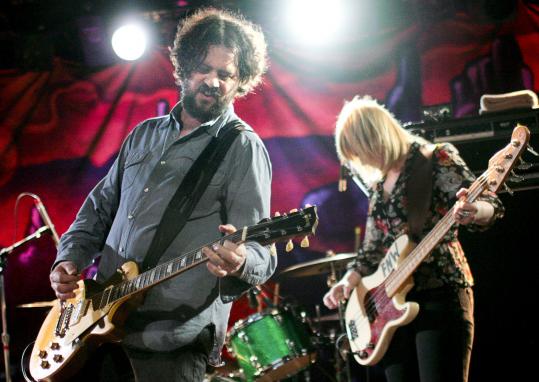 The next time someone whines to you that rock 'n' roll is dead, killed by a wan army of sensitive emo types in guyliner, please buy them a ticket to see Drive-By Truckers.

Saturday night at the Paradise the Alabama-bred quintet of name-takers and butt-kickers made a convincing, and lengthy, case that a couple of guitars, a pedal steel, a driving beat, and gritty harmonies can still tell tales worth hearing.

Although the vocal mix could've used some more tweaking to fully illuminate the harmony parts, Patterson Hood's grainy tenor, with its mix of defiance and regret, and Mike Cooley's dry croon were in tip-top shape as they alternated lead vocals.

Whether Cooley was lamenting the power of the demon drink on "Women Without Whiskey" or Hood was opining about life's simple pleasures and big confusions on "The Righteous Path," the guitars stayed hot and the rolling and tumbling grooves - in which echoes of everyone from Lynyrd Skynyrd to the Rolling Stones could be heard - remained cool.

Other highlights from the two-hour-plus set that reached deep into the group's catalog of twang and bang included the waltz-time oldie "Bulldozers and Dirt" and the raucous chant-along "Hell No, I Ain't Happy," one of many that featured Cooley's sizzling, spidery guitar solos.

Bassist Shonna Tucker also stepped up to the microphone for the wistful "I'm Sorry Huston."

If the departure of guitarist Jason Isbell or the healthy helping of tracks from DBT's latest release, "Brighter Than Creation's Dark," were a disappointment to any in the sold-out crowd it was not detectable amid the cheers and constant stream of requests.

Although the members jokingly recalled their very first Boston show back in 1999 as a disaster, it's clear that over the years they've been embraced in these parts and are grateful. Hood thanked the audience sincerely and at length for selling out the show in advance. But verbal expressions of gratitude were unnecessary as he and his clearly jazzed cohorts showed their appreciation all night with a fiery, much-needed infusion of music that examined topics as tiny as sideburns and mammoth as the heavens above with a pulse-quickening, heart-opening verve.

Priming the pump for DBT were the Whigs, a trio from Athens, Ga., who combined many of the same country-rock elements plus a dollop of Fab Four-style dreaminess in their well-received opening set.

Sarah Rodman can be reached at srodman@globe.com. For more on music, go to boston.com/ae/music/blog.

At: the Paradise Saturday