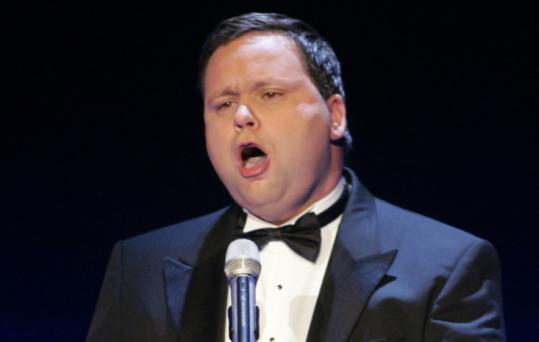 Last year, tenor Paul Potts became a British television star - and an American YouTube star - singing "Nessun dorma," from Puccini's "Turandot," on the Simon Cowell-produced "Britain's Got Talent." Potts, a mobile-phone salesman whose musical aspirations had fallen victim to the vagaries of life, won the televised competition, signed a record contract, and embarked on a tour, which brought him to the Berklee Performance Center on Sunday.

It was a pop concert with a classical veneer: a conductor in tails (Mark Agnor) leading a 13-piece orchestra (like the singing, amplified) in crossover repertoire drawn largely from Potts's debut album. Many of the pop songs - including R.E.M.'s "Everybody Hurts" - were sung in Italian, in harmonically unadventurous arrangements of sober rhythms and yearning strings. Schubert's "Ave Maria," conversely, had pop touches, from the opening bell-tree tintinnabulation to a rising modulation into a final chorus. (Potts's guests on the tour are the Three Graces, a polished female pop-opera-Broadway trio whose singing exemplified the best of the "American Idol" style.)

Potts's pretty voice can demonstrate some impressive ringing power in climactic moments. But Sunday's performance was inconsistent; in the middle and lower range, Potts used a precariously open-throated production that led to frequent problems with intonation. Singing in English seemed to compound the difficulties; he fared better with the Italian language, or - as in a "Student Prince" medley, a tribute to Mario Lanza - an Italian accent.

Potts's fans no doubt consider such criticisms irrelevant nitpicking. ("We love you, Paul!" was a not infrequent cry.) He embodies the age-old fantasy of undiscovered talent; Lanza himself acted out a number of screen variants, beginning with his truck-driver-turned-star in "That Midnight Kiss." Potts's unsophisticated stage presence emanates sincerity, and he came off as a genuinely nice person during extensive patter; even the front-of-house crew received a thank-you. "Nessun dorma," the inevitable encore (the music appears on one of his lobby-sale T-shirts), was a preordained hit with the crowd.

Opera remains a symbol of great artistic achievement even among those largely unfamiliar with it; one suspects that Potts won "Britain's Got Talent" - and filled the Berklee hall - not because his "Nessun dorma" was comparatively masterful, but simply because he sang it at all. But the art form is built on the foundation of its greatest interpreters; to program Puccini's aria is to necessarily invite comparison to the likes of Björling, Corelli, and Pavarotti. Paul Potts still has some way to go. At least he's easy to root for.