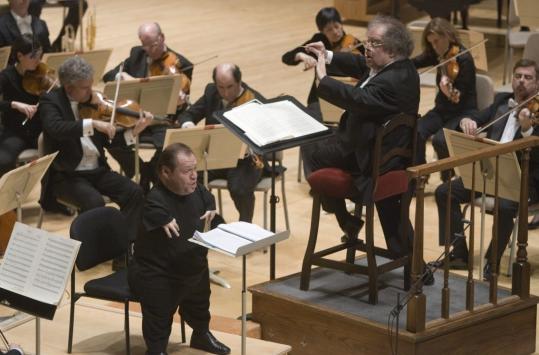 Some composers write in airtight rooms, others leave the windows open. William Bolcom has always had an ear for music with roots outside the concert hall, and he's often brought so-called vernacular styles proudly into his own works. In fact, he writes fluidly in so many different styles, one never quite knows what to expect from a new work. One of his trademarks however is a rare sensitivity to poetic texts and an ability to distill their expressive essence in music.

The poetry of William Blake has been a near-obsession for Bolcom since his teenage years. Over the course of decades, the composer set Blake's entire "Songs of Innocence and of Experience," creating a massive polystylistic oratorio by the same name. And now for his Eighth Symphony, commissioned by the Boston Symphony Orchestra, Bolcom has returned to Blake. James Levine, the work's dedicatee and the composer's friend of five decades, led the premiere last night in Symphony Hall.

Written in four movements for a large orchestra and chorus, it is a grandly dark work with a premonitory, almost apocalyptic cast. It is densely packed with texts extracted from three of Blake's prophetic books: "The Marriage of Heaven and Hell," "America a Prophecy," and "Jerusalem." The first movement, entitled "Rintrah Roars," opens with an giant yawp and ends with angry towers of dissonance erected by the brass. Near the end is an image of "a just man" who "rages in the wilds where lions roam." This could be his symphony.

The chorus has an extremely prominent role throughout the 35-minute work. Those not steeped in the mythology of Blake's prophetic poetry will need to rely on help from the program to grasp the meaning of figures like "the shadowy daughter of Urthona" or "the red Orc." Or you can sit back and let the textual details slide. Bolcom's choral writing is so assured that the expressive force of the music comes through clearly. This is especially true in the rich and harmonically pungent passage that closes the second movement. The finale ends with a grand orchestral-choral tapestry woven from Blake's line "For every thing that lives is Holy," and crowned with a blazing apotheosis.

The sincerity of this music is touching and there is no denying its primal expressive power; its dimensions feel at times overstuffed and its emotional pitch less varied than one might imagine for a cosmos as vast as Blake's. Singing from memory, the Tanglewood Festival Chorus gave a positively heroic performance, and Levine and the orchestra went a long way toward bringing out the countless buzzing details in this score. Prior to the Bolcom, Levine led Schubert's Fourth Symphony and a grouping of orchestrated Schubert songs, sung with eloquence and peerless integrity by the bass-baritone Thomas Quasthoff.

Not all of the orchestrations did equal justice to the spare magic of Schubert's originals, but Webern's rendering of "Der Wegweiser" and Reger's take on "Erlkönig" came across with particularly striking effect: Schubert's old wine in new orchestral vessels.