Documents of tragedy, for chorus and orchestra 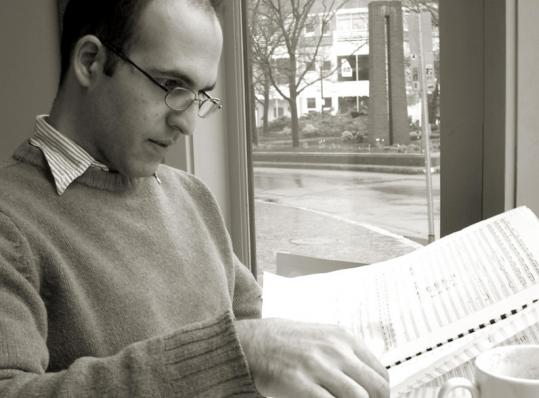 Composer Lior Navok's work is distinguished by its sincerity, its courage, and its ambition.
Email|Print| Text size – + By Jeremy Eichler Globe Staff / January 21, 2008

On Friday night in Jordan Hall, the Cantata Singers unveiled the third work in its admirable Slavery Documents commissioning series. The newest piece, titled "And the Trains Kept Coming. . .," is by the young Israeli composer Lior Navok. It dives headlong into the wrenching subject of the Allies' failure to bomb the railroad tracks that led to the Nazi death camps and, thereby possibly save untold numbers of lives during World War II. In Navok's treatment, this failure to bomb becomes an emblem of the world's broader lack of compassion at the time, as with the storied cases of refugees denied sanctuary.

These fraught subjects have been fodder - necessarily - for endless political, historical, ethical, and even theological grappling. Given the manifestly good intentions behind this project and the intensely committed performances of everyone onstage, I wish I could report that these subjects had also made for an effective oratorio. Navok's work is distinguished by its sincerity, its courage, and its ambition in taking on such a difficult task. I imagine that those were some of the qualities which, along with the natural urge to honor the memory of victims, drew a standing ovation from Friday's audience.

But because the piece is so dominated by an overstuffed text, it ultimately comes across as more of an anguished history lesson - a Holocaust documentary for chorus and orchestra - than it does a fully realized work of art likely to bring a listener into a new or deepened dialogue with this painful chapter of the past.

The composer culled his primary source materials from archives in Israel and Germany, stringing together a text with no fewer than 37 sections, including Nazi memoranda, train schedules, survivor testimony, diplomatic communications, governmental reports, and much more. They trace sadly familiar arcs of victim desperation, grim Nazi efficiency, and governments standing by. On their own terms, many of the texts are deeply moving, especially when one can pause to appreciate the heartrending sentiment that still lingers in the spaces between the words.

That, however, is precisely what Navok's new work does not permit. Onstage, the texts are given almost no room to breathe and they come at you in a near-constant and entirely frontal barrage. Soloists deliver long paragraphs in a kind of urgent speech-song recitation, or the chorus intones with Orff-like primal force about, for example, "A theatre of horrors/ A mob stage/ Blind Eye to Murder." A bigger and more developed role for the orchestra would have helped, but Navok makes it the servant of the texts in often resourceful but ultimately linear ways.

Overall, Navok's style of presentation has the paradoxical effect of muting the power of his material. It also suggests a lack of faith that the listener could feel his or her own way into this tragedy, but that is, in the end, the only way to get there. You can appreciate an impulse to grab the audience's collective lapels and proclaim this horrific story as if it were being revealed for the first time - and indeed, rather oddly, it's written as if the explosion of Holocaust memory of the last 40 years had not taken place - but this is not typically a recipe for effective musical-dramatic art. And suffice it to say that the gas chamber interlude, in which the large chorus is asked to imitate mass death with the sounds of frenzied coughing and asphyxiation, was a mistake.

After intermission, David Hoose led the first local performance in "The Prophets," excerpted from Kurt Weill's fascinating and gigantically scaled 1930s biblical opera-pageant "The Eternal Road." It made for an inspired pairing with Navok's work. The Cantata Singers augmented its forces with the capable members of the Spectrum Singers and the PALS Children's Chorus.

Throughout the evening, the performances ranged from strong to superb; there were too many soloists to list but among the standouts were David Kravitz, Rockland Osgood, Dana Whiteside, and the boy soprano Frederick Metzger.