THIS STORY HAS BEEN FORMATTED FOR EASY PRINTING
Classical Music

For Elgar, 'The Dream of Gerontius' went from mistake to masterpiece 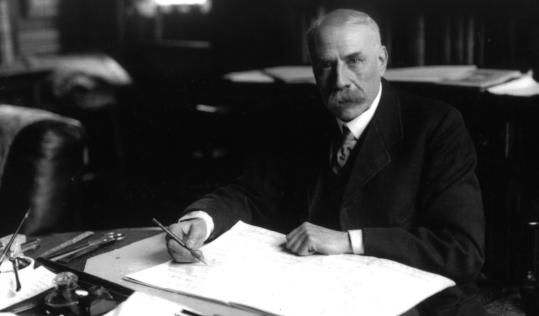 Edward Elgar (above) based the oratorio, which premiered in 1900, on a 19th-century poem by John Henry Cardinal Newman. (The new york times)
Email|Print| Text size – + By Matthew Guerrieri Globe Correspondent / January 20, 2008

The premiere of "The Dream of Gerontius," on Oct. 3, 1900, was a disaster. Having poured his soul into its composition, Edward Elgar was despondent. "I always said God was against art," he wrote.

Elgar had, characteristically, overreacted. More than one critic had glimpsed through the veil of the poor performance the grand outlines of what would soon be considered Elgar's masterpiece. Within three years, the oratorio having triumphed in Germany and America, Elgar would conduct the London premiere in the newly built Westminster Cathedral. The Boston Symphony Orchestra performs the work this week.

At the time, however, Elgar's disappointment was very real. With the successful debut of the "Enigma" Variations in 1899, he was, at age 42, on the cusp of establishment success, but the initial failure of the ambitious "Gerontius" seemed to presage a return to provincial obscurity. The son of a shopkeeper, a Catholic in Anglican Britain, Elgar had spent years on the outside looking in.

No wonder the journey of the Everyman figure Gerontius - from earthly life through death to divine judgment, one initiation after another - seized Elgar's imagination. When asked by the composer what she thought of the vast "Praise to the holiest" chorus that anchors the second part of "Gerontius," Dora Penny (a dedicatee of one of the "Enigma" Variations) said, "It makes me think of great doors opening and shutting." "That is exactly what I mean," Elgar confirmed.

Elgar's emotional connection with Gerontius gives the character a personal dimension missing from John Henry Cardinal Newman's original poem. At the same time, it amplifies the universality of Gerontius's condition. Sir Colin Davis, who will conduct the BSO's "Gerontius" this week, summed it up by phone from London earlier this month.

"We're all outsiders from the first, really, and I think that's something we all feel," Davis says. "What are we here for, and why, and how long are you going to last? And is there anything beyond us?"

Newman was, for much of his life, perceived as something of an outsider himself. When the Anglican vicar famously joined the Catholic church in 1845, it was only the latest in a series of conversions: atheism to Christianity, Low Church liberalism to High Church authoritarianism, a series of thresholds rivaling his protagonist's. His elevation to cardinal came only after the death of Pope Pius IX, who mistrusted Newman's unusual mix of mystical faith and skeptical inquiry. "God intends me to be lonely," Newman once wrote. "He has so framed my mind that I am in a great measure beyond the sympathies of other people and thrown upon Himself."

"The Dream of Gerontius" poured out in a rush: the original manuscript was divided among 52 scraps of paper, Newman grabbing whatever was at hand in the heat of inspiration. (He later claimed the poem was "written by accident.") The title character - whose name is a play on the Greek word for "old man" - continued a long tradition of generic heroes in didactic religious allegories, but Newman's poem was explicitly Catholic, in particular his portrayal of purgatory, a place of temporal punishment for imperfect souls requiring further purification before entrance into paradise. At the poem's climax, Gerontius's soul, shriveled and burned by the presence of God, is sent to purgatory, happy in the expectation of his eventual salvation.

"It's an amazing, almost startling portrayal of Catholic theology," says tenor Ben Heppner, who will sing the role of Gerontius in this week's performances. And, Heppner thinks, even those portions which seem unmistakably Victorian, Elgar makes new: "The music transcends the poem's time and place."

Elgar elides much of Newman's theological exegesis; even Gerontius's deathbed profession of faith, "Sanctus fortis," becomes a bravura tenor aria of near-Wagnerian cast, the chromatic, yearning melody as much about his fear of the unknown as his catechism. "It does seem to be a bit incongruous," Heppner acknowledges - a dying man singing with the clarion force of a Parsifal. But for Elgar, Gerontius's inner state trumps his sentimental deathbed scene. "His body may be weak," Heppner says, "but his emotions are huge."

Davis points out that the theology is only an earthly frame for the eventual unearthly journey. "Many people bridle at the specific things which presumably Gerontius believes in - the teachings of the church, and the priest, and the 'kyrie eleison,' and all that," Davis says. "These are the trappings of the religion that we know." But after Gerontius's soul leaves his body, "we don't really know where we are" - the scene shifts to a purely conjectural vision of the afterlife. Once Elgar enables Gerontius to claim our sympathy, the ineffable vision becomes immediate.

Elgar's abridgment also leaves open the question of who exactly is having the "Dream" referred to in the title: Gerontius? Newman? Us? Davis notes the possibility that life itself may be the dream. "It's been expressed by many people before - they feel their lives are very dreamlike," he says. "Am I just somebody else's dream?" ("I wish they'd wake up sometimes!" he muses.)

The oratorio unfolds with intuitive, sometimes impulsive spontaneity, the music held together with an ingenious use of Wagnerian leitmotifs rather than formal scaffolding. "The music is so extraordinary, and flexible, and expressive; it's much looser in performance than it even looks on the page," Davis says. "He couldn't have structured it in a classical tempo, because it's exploratory, really."

Elgar's exploration retains its power because his subject remains, after all, undiscoverable to mortal minds. "It's a unique piece, because he's trying to tell us about an experience which he hasn't experienced," Davis says. "I don't know if you can call it a revolutionary piece, but he was breaking new ground. And I think that's what makes it so terribly touching. Because he really believes in it all."

Davis is now 80, an age at which he acknowledges that his interest in "Gerontius" has become more personal: "I'm nearing my end, and I must say, it's a very peculiar feeling, of being trapped in this mad life that you've been trying to make sense of." The gap between Elgar's cinematic vividness and the subject's ultimate mystery still provokes, comforts, and disturbs. "I think that Elgar, in his way, whatever his own ideas about the piece, he is feeding our imaginations," Davis says. "That's what art is supposed to do."