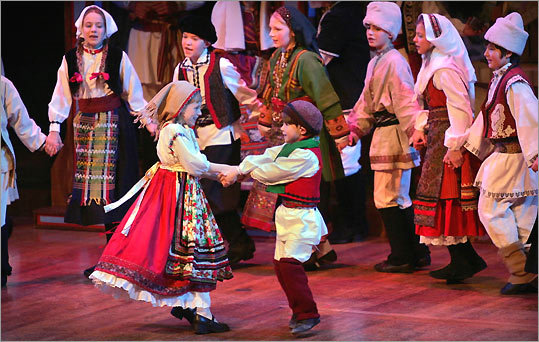 CAMBRIDGE - After a brief flirtation with irony and slapstick in 2006, "The Christmas Revels" has returned this year with a warm, down-to-earth embrace of global folk arts and traditions. The 37th annual staging of the Revels' winter solstice celebration turns to the Balkans for inspiration - Bulgaria, Croatia, Macedonia, Serbia, and Bosnia - and the nearly three-hour pageant of music, dance, and seasonal rituals is a feast for both eyes and ears.

More than 80 performers draped in bold tapestries, richly embroidered blouses, and colorful head scarves create lush tableaux around a loosely woven presentation of songs, dances, poems, and stories. There were animal-masked shamans cleansing evil spirits from households, bonneted children enacting traditional games, a traditional Bulgarian koleda, or blessing, for a courtship, and a tribute to the mythological tree of life from the Croation island of Pasman.

Exuberant dances from the Mladost Folk Ensemble were charming, as was something resembling a Bulgarian jam session, featuring the flute-like kaval, a bowed string instrument called gadulka, and the gajda, a goat's hide bagpipe. David Coffin, the master of ceremonies and a veteran of 40 Revels productions, was a genial host. But the musical heart and soul of the show is the six-woman ensemble Libana, Boston-based world music specialists whose close, penetrating harmonies and intricate rhythms were riveting.

Set designer Jeremy Barnett has transformed the Sanders Theatre stage into a cross between a village square and a cottage kitchen, complete with whimsical trees, rustic wreaths, magical snowfalls, and a massive, glowing hearth. Midway through the production an enormous loaf of bread was pulled from the hearth and passed hand-to-hand down the aisles - a tasty addition to the audience-participation rites of group singing and dancing en masse in the theater lobby at the close of the first act.

Once again Revels has embedded production touchstones into the show, among them rousing singalongs of the decidedly un-Balkan "Hark! The Herald Angels Sing" and "We Wish You a Merry Christmas," the Lord of the Dance, and the Mummers Play. Despite recasting the familiar Revel figures of Grandfather Christmas, Saint George, and others to fit the Balkan mythical hierarchy, the sight of a cow in a nurse costume and a dragon dressed in shiny polyester was an unwelcome jolt in the midst of the otherwise gracious, earthy rituals.