They're rocking out for Hanukkah

The LeeVees spread a silly brand of holiday cheer 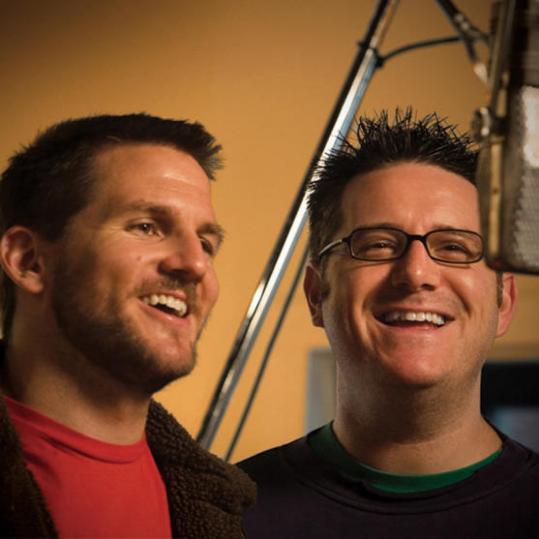 Guster's Adam Gardner (left, with Dave Schneider) says the two "started writing songs about Hanukkah because we both felt that there was a serious lack of good songs for the holiday, and certainly none that kids could rock out to." (Ted Kawalerski)
Email|Print| Text size – + By Geoff Edgers Globe Staff / December 12, 2007

Adam Gardner, guitarist for the band Guster, will play Symphony Hall with his side project, the LeeVees, tonight as part of a private Pops holiday fund-raiser. Gardner recently answered a few questions about his Hanukkah-themed band and the Pops gig via e-mail.

Q. Are there any good Hanukkah songs? (And you can't pick your own.)

A. There are a few: "Sivivon Sov Sov Sov" is a more traditional one that I like. The only modern Hanukkah song outside of the LeeVees that I know of is Adam Sandler's "The Chanukah Song," which cracks me up, but is more a piece of comedy than a great musical song.

Q. You know, Neil Diamond's Jewish. So why did he record Christmas music?

A. I'd imagine for the same reason why so many major artists record Christmas records - it's a moneymaker. Irving Berlin, a member of the tribe, penned one of my favorite Christmas songs - "White Christmas." I can testify firsthand, however, that making a Hanukkah album isn't exactly a cash cow.

Q. Why did you form the band?

A. Dave [Schneider] and I started writing songs about Hanukkah because we both felt that there was a serious lack of good songs for the holiday, and certainly none that kids could rock out to. We approach this themed music as two guys in rock bands that write pop music. These songs don't rely on "shtick" . . . these songs stand on their own musically. Because it's a holiday album, we felt free to be as bombastic with the production as we wanted. I think [Boston Pops conductor] Keith Lockhart was drawn to this bombast and how well it would lend itself to the Pops.

We pulled together the band after recording [the CD] "Hanukkah Rocks" and went on tour opening for Barenaked Ladies during their holiday tour. The LeeVees are a side project for all of us (Dave LeeVee is in the all-hockey themed Zambonis, Shawn [Fogel] LeeVee has a solo project, Shank Bone Mystic has a band called Deleon, and Michael [Azerrad] LeeVee is a writer most known for authoring [the book] "Our Band Could Be Your Life"), which creates this great sense of freedom. None of us are doing this for any other reason than to have fun and spread some Hanukkah cheer.

Q. What, in your opinion, are your most memorable lyrics?

A. From "Gelt Melts": "If goys can eat a chocolate bunny, why can't we eat chocolate money?" From "Applesauce vs. Sour Cream": "It's the choice you're gonna have to make - the grease is starting to coagulate." From "How Do You Spell Channukkahh": ". . . back in elementary school a Spanish kid told me that it starts with a silent J, but Julio was wrong."

Q. Are you all Jewish?

A. Everyone in the touring band is Jewish, although it's not a requisite.

Q. Did you all go to Hebrew school?

A. A newer song that is part of the LeeVees branching out from being just a Hanukkah band is called "Hebrew School Dropout." It's about an experience that both Dave and I shared.

Q. Who would you rather bring home for Shabbat dinner, Bobby Fischer or Mel Gibson?

A. Well, that's a tough choice, but really the harder decision would be what way to take advantage of the situation to its fullest. . . . Do you go with the old standby of laxative brownies? Or something totally new and exciting?

A. There are so many of them that I like. The Ramones were an influence on the LeeVees record. "Gelt Melts" is our attempt to be Ramones-ish. That's also probably why we each take on LeeVee as our last names when the holiday rolls around.

Q. How did the the LeeVees come to play with the Pops?

A. Guster was the first band to perform with the Pops at Symphony Hall as part of their Pops on the Edge [program]. It was a great success and so much fun for both the band and the orchestra. We had kept in touch with Keith and the Pops administrators, and had a repeat performance with the Pops when we invited them to play with us on "Late Night With Conan O'Brien" (we performed "Satellite" from the most recent release, "Ganging Up On the Sun"). It was in the green room of NBC when Keith pulled me aside and told me how much he liked the LeeVees record. I don't even know how he heard it, but I was flattered. That's when the talk of the LeeVees and the Pops playing together over the holidays started.

Q. How long will you play at Symphony Hall, and what will the set consist of?

A. It's really more of an appearance than a set. We'll be playing "Latke Clan" and "How Do You Spell Channukkahh?" with the Pops. I'm thrilled to be playing with the Pops again - it was a career highlight when I did it with Guster. Having the sound of a 100-piece orchestra behind you when performing a song you wrote in the locker room of a college gym in Peoria is a truly surreal experience.

Geoff Edgers can be reached at gedgers@globe.com. For more on the arts, visit boston.com/ae/ theater_arts/ exhibitionist.