No holiday for Hall & Oates at Orpheum 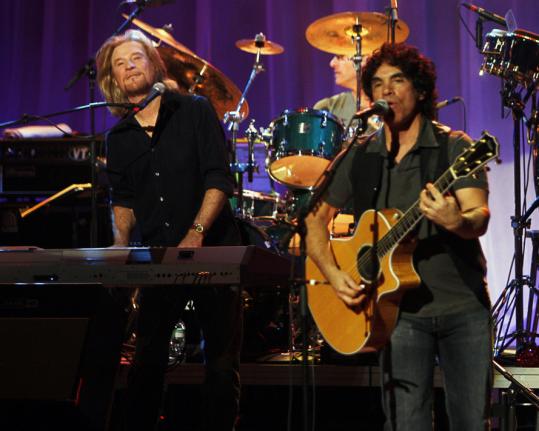 Although the mix of uncomfortable tension and the holiday season is as familiar a yuletide cocktail to some as eggnog, it is not an ideal blend for tidings of comfort and joy in concert.

Saturday night at the Orpheum Theatre Daryl Hall's escalating anger at ongoing technical problems and the sold out crowd's restlessness in the face of a lengthy set of Christmas music resulted in one bumpy sleigh ride for Hall & Oates.

The tour was billed as "Home for Christmas" but some in the audience were clearly - and loudly - unprepared for the entire first hour of the two hour-and-15-minute performance to be dedicated to the always sublime Philly soul-pop duo's lovely 2006 contribution to yuletide cheer of the same name.

The constant chatter, and later, some outright booing, seemed to not take into account how strong Hall, Oates, and most of their 10-piece band actually sounded. (Aside from an opening overture, a string quartet was nearly inaudible all night).

Hall, in particular was on his game. The 61-year-old - who incidentally looked amazing enough to make you wonder about crumbling portraits in his attic - channeled his inner choir boy for "O Holy Night," took it way down south for the lively uptempo gospel shuffle of "Children Go Where I Send Thee," and unearthed the Band's rocking "Christmas Must Be Tonight."

That during and between these performances Hall was also gesturing furiously at his sound and guitar techs, felt the need to sound check mid-show, and at one point insulted the upkeep of the theater made for some uneasy moments. Oates's demeanor was placid but he certainly had reason to be annoyed at his more poorly amplified solo spots.

An ultra-brief two-minute intermission that found patrons scrambling noisily back to their seats was the only major glitch in the show's more warmly received second set, which offered up a string of hits including "She's Gone," "Rich Girl," "Out of Touch," "You Make My Dreams," and "Sara Smile" and found the audience rising to its feet.

While some guitar and sax vamping during the sinuously funky "I Can't Go for That (No Can Do)" went on long enough to inspire daydreams about other songs that could've fit into that space, the tide had clearly turned.

Ultimately the night ended with a surfeit of good cheer as the crowd refused to accept an encore of "Jingle Bell Rock" as the end of the night. Even though the house lights were partly up the demand was great enough for the duo to return for "Kiss on My List" and "Private Eyes."

At: the Orpheum Theatre Saturday