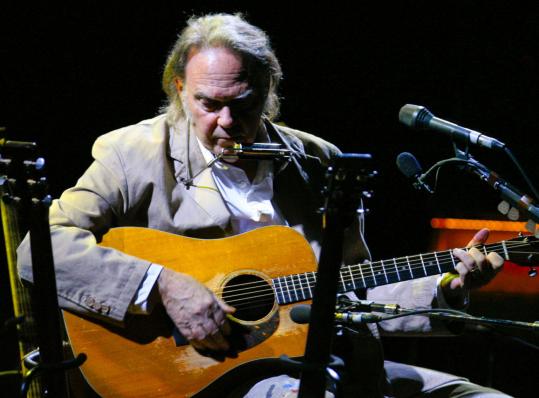 Neil Young is a notorious control freak, as he joked during Thursday's show. And he wasn't kidding. Fans walking into the Orpheum Theatre were given a small slip of paper informing them when, exactly, they could consume a beer. (During the opening act was fine, but not when Young took the stage.)

A pre-show announcement requested quiet and no shouted-out requests. Young had carefully developed his playlist, the voice said over the P.A. Please respect the artist.

Young can afford to be picky. Instead of arenas, he's playing theaters because he doesn't want to be forced into a greatest-hits medley. Still, he played "Old Man" and "Cinnamon Girl." In fact, the set list seemed crafted for both the obsessive, tape-trading set as well as relative newcomers.

The staging was also striking. Young has always embraced the theatrics of a concert, whether installing comically super-sized Fender amps in the '70s or, less successfully, turning his shows into a blurry, community revue. (Remember "Greendale"?) Only a few flourishes in the current set-up threatened to distract. Yes, a man in a red jacket at the back of the stage spent the entire show working a canvas. But you could ignore the painter or let him fade into the scenery. The set itself resembled an abandoned Hollywood soundstage, framed by a rack of crooked, multicolored letters, a disco ball mounted under a piano, and cigar-store Indian at the edge of the stage.

And there was Young, ragged as ever. At 62, his stringy, overgrown hair no longer conceals a bald spot. He wore a baggy, untucked shirt and slacks splattered with paint. Singing the thrashing "Dirty Old Man," he looked as if he could audition for the part.

For the opening set, Young came out alone, sat in the center of a circle of guitars, and launched into the first of 12 acoustic songs. Some were straight off the record, others transformed. He picked up a banjo for "Mellow My Mind," a darkly twangy ballad from 1975's "Tonight's the Night." He switched between a piano and a Casio-soaked keyboard on "A Man Needs a Maid."

After a short break, Young returned with a band and his trademark Gibson Les Paul. It was time to go electric. The mix was good, the playing excellent, but strangely, the crowd remained seated and quiet for the first few songs. Perhaps, having heeded the pre-show warning, they were scared to break the rules.

There were missteps Thursday, namely a version of "No Hidden Path" that, at more than 25 minutes, clearly violated local noodling statutes. But other songs, including oldies like "Winterlong" and the recently released "Spirit Road," made up for the slog.

Young ended his first two Orpheum shows with old familiars, "Cortez the Killer" and "Like a Hurricane." Thursday, he tossed an unexpected curveball. He played "The Sultan," a surf-rock instrumental he wrote in the early '60s with his high school band, the Squires. As Young played, a bearded man in a turban - apparently playing the title character - stood sternly near the front of the stage, arms crossed, until the time came to hit a large gong.

Song over, Young and his band retreated. The "sultan" remained, took a bow, and left, signaling the end of the night.