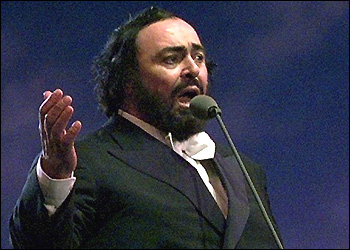 There were many great tenors active in the second half of the 20th century, but for millions of people Luciano Pavarotti was the main man, the only one. His singing gave more pleasure to more people for a longer period of time than any other classical singer in history.

Mr. Pavarotti died early this morning at his home in Modena, Italy, after a long struggle with pancreatic cancer, his manager, Terri Robson, said. He was 71.

Mr. Pavarotti's operatic career lasted for more than four decades after his debut as Rodolfo in Puccini's "La Boheme" in Modena on April 29, 1961. His farewell appearance in opera was at the Metropolitan Opera in New York on March 13, 2004, his 383d performance in that venue.

But recordings, television, DVDs, arena concerts, charity events with such stars as U2 and the Spice Girls, and his partnership with Placido Domingo and Jose Carreras in Three Tenors concerts carried Mr. Pavarotti's fame far beyond the world of opera.

During his prime, his voice was incomparable, clear and ringing and suffused with sunlight all the way up to high C and beyond; his clear and fervent delivery of Italian words was a model, and so was his legato. His voice, suffused with emotion, made love to every soprano he sang with - and to every audience he sang to.

A critic once wrote that Mr. Pavarotti's vocal cords were "kissed by God." When television interviewer Pia Lindstrom repeated this remark to him, Mr. Pavarotti replied, "God kissed you all over." The tenor's gregarious personality was as endearing as his voice, and he was a good colleague onstage, always willing to help a younger singer.

"I always admired the God-given glory of his voice - that unmistakable special timbre from the bottom up to the very top of the tenor range," Domingo said in a statement from Los Angeles. "I also loved his wonderful sense of humor and on several occasions of our concerts with Jose Carreras . . we had trouble remembering that we were giving a concert before a paying audience, because we had so much fun between ourselves."

Mr. Pavarotti was born on Oct. 12, 1935. His father was an amateur singer and a baker; Mr. Pavarotti shared a wet-nurse with his lifelong friend and frequent costar, soprano Mirella Freni.

"My voice changed when I was about 15," Mr. Pavarotti once told the Globe. "At the beginning it was a very high tenor, and when I changed the voice I began to imitate the movies of Mario Lanza - all of them. He had a fantastic voice, not just a wonderful voice, but a fantastic voice."

The singer's ascent to superstardom did not come overnight. The voice was there from the beginning, and echoes of it stayed with him to the end, but it took him a while to acquire the security of technique, the experience, and the self-confidence that made his unique career possible.

An engagement as a last-minute substitute at the Royal Opera House in London in 1963 earned him a politically incorrect nickname ("Lucky Luciano") and led to an important connection with the soprano Joan Sutherland that was to continue throughout the rest of her career; many of Mr. Pavarotti's best opera recordings were made with Sutherland. The diva was planning a tour of her native Australia and was looking for a tall tenor that she could afford; Mr. Pavarotti filled the bill and sang more than 40 performances during two months.

The tenor had reason to be grateful, for from Sutherland he learned the technique of breathing that carried him through decades of singing.

Mr. Pavarotti's Metropolitan Opera debut in 1968, in "La Boheme" opposite Freni, was only a modest success; he was suffering from the flu at the time. And in fact, it wasn't until 1972 that he became a superstar, when he sang in Donizetti's "La Fille du Regiment" opposite Sutherland and bounced out an immediately legendary string of eight high C's in the tenor aria. After that there was no stopping him.

Although he restricted himself to a handful of roles at the beginning, his stage repertory grew to more than 25 roles, and he recorded several others that he never performed in the theater. He was usually content to play Pavarotti onstage, but in a few of his roles he did create memorable characterizations. His most famous portrayals were of the lovelorn country bumpkin Nemorino in "L'Elisir d'Amore," and as Riccardo in "Un Ballo in Maschera." His signature aria became "Nessun dorma" from Puccini's "Turandot," but he sang the role of Calaf onstage infrequently because he knew how strenuous it is, and he wanted to be able to keep on singing Nemorino.

Soprano Shirley Verrett was a favorite colleague of Mr. Pavarotti's at the Met, in Italy, and on recordings. He called her "La Fabulosa."

"In his concerts, Luciano would throw his arms out wide, waving his white handkerchief, welcoming everyone," Verrett said. "People felt happier in his presence, and that's the way he was offstage too, open and giving."

"His voice," Verrett added, "was something beyond belief, and he worked hard to keep it that way. . . . In all our performances together he recorded himself. Anything that was not the way he wanted it to be was not there anymore at the next performance."

With the Metropolitan Opera on tour in Boston, Mr. Pavarotti sang in "La Fille du Regiment"; "Ballo"; "Tosca"; and "L'Elisir d'Amore." He sang a concert with John Williams and the Boston Pops that was filmed for his sole Hollywood movie, "Yes, Giorgio."

Beginning in 1975, he sang regular recitals for the Series; the first time he was unable draw a full house into Symphony Hall, a problem that never arose again. His last Symphony Hall recital was in 2000, and he returned a year later for a final arena concert in the Boston Garden.

As his celebrity grew, so did his perks. Walter Pierce, director of the Celebrity Series at the time, recalled the day in 1993 he went to pick up Mr. Pavarotti at the airport for a drive to the Boston Garden. His services weren't needed.

"When he landed at the airport, the plane opened its hatch and the cars drove out and took him straight to the old Boston Garden," Pierce said. "They drove up he ramp the circus uses to take the elephants in. He never once hit the ground until he walked out to sing."

Mr. Pavarotti and his tough-talking American manager, Herbert Breslin, were media-savvy. The singer appeared on television talk shows and in ads, hosted "Saturday Night Live," and filmed "Yes, Giorgio," which is remembered mostly for its food fight. His careerlong association with Decca/London records embraced complete operas, recital discs, religious songs, Christmas albums, and crossover material. Many of his stage performances and concert appearances are preserved on DVD as well.

As a celebrity, he was not able to avoid unpleasant publicity and scandal on a variety of fronts. He was accused, sometimes rightly, of laziness and faulty musicianship. It was always faintly comical to watch the Three Tenors anxiously consulting their windblown music stands while singing the familiar melodies the world loves best.

He may have sung too many years past his prime, but he told the Globe in 2000, "I enjoy singing so much, and people seem to enjoy listening to me, so I want to keep on doing it."

Mr. Pavarotti's fluctuating weight - and habit in his later years of overdyeing his hair - occasioned some additional unflattering commentary. He said he had an "important body" and once remarked to Sutherland, "Joan, we fat people know how it is." The diva replied: "Luciano, we are not fat. You are fat. I am big."

Health problems of various kinds led to frequent cancellations, restricted mobility on stage, and some bad relationships with opera companies. His tax problems provided fodder for the Italian tabloids.

Mr. Pavarotti's famously roving eye led to several romantic adventures before his highly publicized divorce from his wife, Adua, in 2000, after 39 years of marriage.

In 2003, he married his administrative assistant, Nicoletta Mantovani, with whom he had been living for several years.

In addition to his wife and their daughter, Alice, he leaves three daughters by his first wife: Lorenza, Cristina, and Giuliana. He also leaves one grandchild.