A Crystal ball on a night of nostalgia 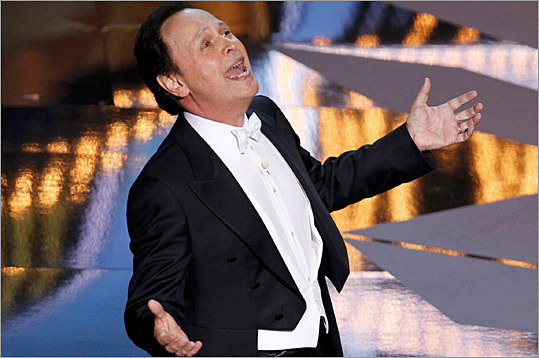 In a year in which so many films celebrated either cinema history itself or were set in the near or distant past - including winners like best picture “The Artist’’ and “Hugo,’’ as well as “The Help’’ and “The Iron Lady’’ - perhaps it was fitting that the 84th Academy Awards focused so squarely on nostalgia.

Last night at the Hollywood and Highland Center in Los Angeles, sepia was definitely the tone. It was set by everything from the “remember when’’ sensibility of returning host Billy Crystal, to montages paying homage to iconic film moments, to acceptance speeches shouting out classic directors like Billy Wilder, to a recurring clip sequence featuring actors reminiscing about the movies of their childhood and what they love about film. There were even old-time popcorn girls roaming the aisles. (And Meryl Streep’s win, although it had been decades since her last one, had the best actress joking that half of America was groaning, “Her? Again?!’’)

After the Great Youth Experiment of ’11 failed - with cohosts James Franco’s arty detachment and Anne Hathaway’s tireless spunk wilting in front of viewers - you could almost sense the relief in the star-studded audience when Crystal returned “home’’ as the host.

As last year’s best actress winner Natalie Portman stated in the pre-show, “You know he’s not going to be mean and he’s going to entertain.’’

And that’s just what Crystal did, pulling several bits out of mothballs to provide the awards-show-hosting equivalent of comfort food.

He, of course, inserted himself into clips from the year’s films in an opening montage which included a silent, black-and-white sequence mimicking best picture winner “The Artist,’’ in which he was forced back into hosting; and slyly worked in a reference to the film he has coming out in November, “Parental Guidance.’’

Crystal also shared a kiss with best actor nominee George Clooney in a play on “The Descendants,’’ with Clooney begging him to come back “where you belong.’’ He then chowed down on pie containing a questionable secret ingredient with the cast of “The Help,’’ and bantered briefly with teen-pop heartthrob Justin Bieber in a funny gag about trying to reach the 18-24 demographic.

The host also reprised his “It’s a Wonderful Night for Oscar’’ musical medley, in which he breathlessly spoofed the nine nominated films - while struggling to be heard above the orchestra. (Numerous microphone issues sprung up throughout the night.) “You didn’t think I wasn’t going to do this?’’ Crystal asked the audience with a grin as he gently jabbed at “Hugo’’ director Martin Scorsese, the controversy around “The Help,’’ and the weight loss of “Moneyball’’ star Jonah Hill.

Throughout the telecast, Crystal seemed at ease, riffing congenially on the winners and the famous faces in the crowd. He brought back his “What Are They Thinking?’’ bit to good effect - for Angelina Jolie, “Billygelina, I love the sound of that’’; and for Nick Nolte, an extended growl. If he seemed a little too tickled by his own jokes, well, he kept things simple and kept the show moving, even if some of the material had a “Get off my lawn!’’ curmudgeonliness to it.

While there’s nothing inherently unpleasant about reminding viewers of great moments past - and the 3-hour-and-10--minute telecast was enjoyable enough - in times of slumping box office numbers, it might have been wiser to also remind audiences of what’s great about going to the movies now.

Luckily, that did happen throughout the night, as occasional splashes of youthful color and a contemporary sensibility cut through.

The ladies of “Bridesmaids’’ received a lovely response and then made some mildly risqué jokes about the merits of “size’’ while presenting the short film awards. Costars Rose Byrne and Melissa McCarthy also comically brandished nips of alcohol to continue the “Scorsese’’ drinking game they started last month at the Screen Actors Guild Awards.

Actress Emma Stone was a bright light, riffing on the excitement of her first-time Oscar experience alongside a “jaded’’ Ben Stiller. And Robert Downey Jr. elicited groans and giggles with a bit about making a “documentary’’ called “The Presenter’’ that was perhaps a subtle poke to a recent cohost.

The eye-poppingly acrobatic Cirque Du Soleil performance may have had little to do with film - and was also set to a backdrop of classics like “North by Northwest’’ - but it was a great visual spectacle.

Among the night’s local connections were Berklee alumna Esperanza Spalding performing “What a Wonderful World’’ during the “In Memoriam’’ segment, and a win for Bay Stater Nat Faxon in the best adapted screenplay category for “The Descendants,’’ which he shared with Jim Rash and director Alexander Payne.

For many Oscar watchers, of course, the night began long before the telecast with the red carpet coverage.

As the gang at E! prattled on about up-dos and peplums, Ryan Seacrest was getting dusted with pancake mix by Sacha Baron Cohen - dressed in the garb of “The Dictator’’ from his upcoming film and quickly ushered away from the mess by a team of men in suits.

ABC’s Robin Roberts was last night’s gold standard. The incredibly gracious “Good Morning America’’ host did a bang-up job handling nervous starlets, veterans, and fashion banter, and easily integrated the partners of whomever she was talking to into the interview.

ABC also had a nice filler package with some “mominees’’ - mothers of nominees - beaming about their kids. Nina Clooney recalled her son George calling her as a young actor and saying “I’m the best-known unknown actor out here and I’m paying my bills. If that’s all it ever is then that’s OK.’’

Other highlights from the carpet included best supporting actor nominee Nick Nolte admitting that he could not understand a thing his interviewer was asking him and talking about his pet crows, and Clooney confessing that he was enjoying being in a “sandwich’’ with date Stacey Keibler and Roberts.

The most candid admission came from show co-producer and film veteran Brian Grazer, who said he’d done tequila shots before the show.

Check out stars like Viola Davis arriving at the show in Hollywood.

Ben Stiller played the straight man to a goofy Emma Stone during their presenters' bit.
Your comment is subject to the rules of our Posting Policy
This comment may appear on your public profile. Public Profile FAQ