Fresh hosts, at a familiar parade 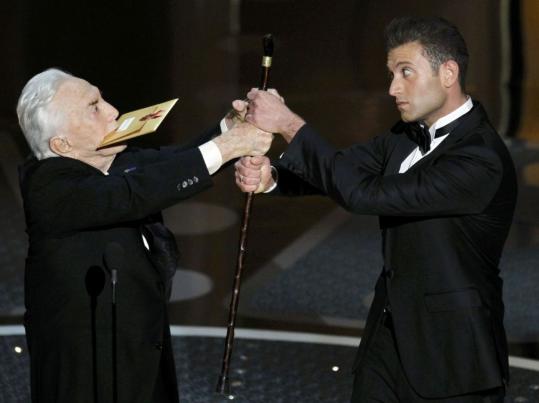 Kirk Douglas tries to wrestle his cane away from an awards escort during the ceremony. (Gary Hershorn/ Reuters)
By Matthew Gilbert Globe Staff / February 28, 2011

No matter how you dress it up, the Oscarcast is still the Oscarcast. Despite a pair of pretty young hosts hired to bring a hip and relevant vibe, the show floated forward like a big old, hollow blimp — a blimp driven by a cheerful princess and her mopey consort, Anne Hathaway and James Franco.

The Academy Awards ceremony is a stiff night of self-importance and back-patting, by definition, and that atmosphere can swallow anyone in its path. Alas, even the blushingly gorgeous and polite Hathaway, who sang a typically silly Oscar number goofing on Hugh Jackman and made the requisite bad jokes with a smile, succumbed.

Right off the bat, Franco and Hathaway were stranded in a predictable opener that dropped them into clips from nominated movies. Isn’t that bit getting tired? Time to come up with a fresher concept, Oscar writers. Franco and Hathaway bantered, with remarkably little wit, with the characters in the movies. The appearance of last year’s Oscar cohost Alec Baldwin added the only true energy in the sequence, especially when he told them, “You just got inceptioned’’ and revealed that they were not traveling in his dream.

It didn’t help at all that Franco seemed almost glum at times onstage, as if he’d had second thoughts about taking the job. Or maybe he was just nervous about being a nominee, or about having to come out on the stage in Marilyn Monroe-like drag for no good reason (except for its photo op-itude). He didn’t seem to be having a very good time. When he and Hathaway pretended he thought she’d been nominated for “Love and Other Drugs,’’ Franco looked downright beleaguered.

With his bleary eyes and his too-cool-for-the-room attitude, Franco was ripe material for a “Saturday Night Live’’ skit. He may have left a few viewers longing for Ricky Gervais.

Otherwise, there were a handful of noteworthy moments in the three-hour telecast. In the night’s Big Surprise, Billy Crystal came onstage to much applause. “Wow,’’ he said, “So where was I?’’ After a few bland late-night-monologue-style gags, he paid homage to another Oscar host, Bob Hope, whose image was somewhat eerily projected at the podium delivering jokes. The presence of Crystal and Hope only served as a reminder of the disappointment of this year’s hosting experiment.

A speech-impaired Kirk Douglas tried to create a legendary Oscar moment by stalling repeatedly before announcing the best supporting actress winner. The bit strained patience but, you know, it was Kirk Douglas. When he finally named Melissa Leo of “The Fighter,’’ she came to the stage, bowed to his greatness, and asked him to pinch her.

Leo couldn’t have been unprepared; she was the favorite. But still, she was at a loss as she struggled to take in the moment. When she found her words, including double thanks to the director of “The Fighter,’’ David O. Russell, one of them was bleeped out. Later on, winner Christian Bale for “The Fighter’’ noted her delivery of the “f-bomb,’’ making a joke about his own liberal use of the word during his famous on-set “Terminator’’ rant.

Bale, by the way, was affecting during his acceptance speech, especially as he choked back tears while thanking his wife. He has accepted many kudos and awards for his performance, but still he was moved by his Oscar moment.

Randy Newman delivered an amusing meta-acceptance speech, talking about how he was told not to recite a list of people to thank because it’s not good TV. Later, though, both Natalie Portman and Colin Firth disproved the point by making gracious, charming acceptances filled with names.

If you’re a true Oscar freakazoid, you were watching the very start of E!’s red carpet. Before the bigger stars started walking, like competitive show dogs led down the carpet by their publicists, the filler was awesome. Last night, E! delivered a visual timeline of Portman’s baby bump. Guess what? It was small and it got bigger. And when Portman finally swanned along the carpet in purple, the bump had grown even more.

What else filled time before the arrival of the likes of Gwyneth Paltrow (greyhound), who said she was nervous about presenting, and Scarlett Johansson (springer spaniel), who ate salmon for dinner, and Helena Bonham Carter (schipperke), who was as goth-glam as ever? A blimp with a scrolling good luck message to nominee Hailee Steinfeld.

Right now, other than the sensible, likable Robin Roberts, I find Tim Gunn on ABC the easiest red-carpet interviewer to watch. While the E! folks fawn and Maria Menounos is aggressively chipper, Gunn is an authentic fan. After Justin Timberlake had spent an hour on the carpet, fielding very predictable questions, Gunn giddily asked him, “What was the craziest question you were asked?’’ His question might have been its own answer.

Celebrities arrived at the 83d Academy Awards in style.

James Franco and Anne Hathaway are co-hosting this year's show.
Your comment is subject to the rules of our Posting Policy
This comment may appear on your public profile. Public Profile FAQ