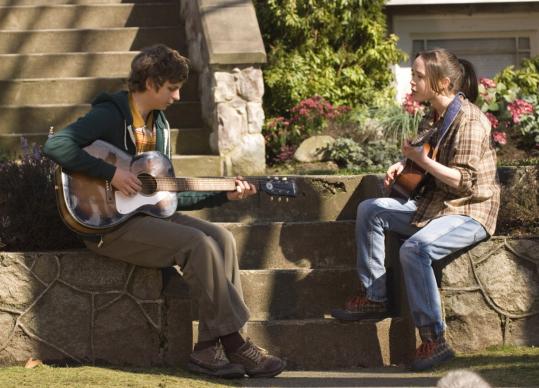 Ellen Page (with Michael Cera) says, "Girls haven't had [this] sort of character before. We don't have our 'Catcher in the Rye.' "
Email|Print| Text size – + By Wesley Morris Globe Staff / February 24, 2008

et's pretend for a moment that "Juno" isn't nominated for four Academy Awards, that its odds of winning tonight's best picture Oscar aren't about as good as the excellent odds for "There Will Be Blood." Let's pretend this comedy about the 16-year-old smart-ass impregnated with the wimpy emo kid's baby is just another arch little movie and not this year's lucrative Little Movie That Could.

In fact let's pretend that rather than being distributed by Fox Searchlight, "Juno" was a show on Fox called, for convenience's sake, "Juno." The movie would seem less like a novelty and more like a very special episode of the sort of sitcom the networks stopped making sometime after "Blossom" and "Clarissa Explains It All." The know-it-all-ism would grate less.

But "Juno" has become what didn't seem possible when it began charming audiences at film festivals last fall: a phenomenon. A "Juno" is now a genre of sardonic high school girl. The film's suburbanized black slang appears to have infiltrated the zeitgeist (yes, kids, "homeskillet" and "fo' shizz" have been reapproved for your use), rumors of a "Juno" video game abound, and her hamburger phone is now a must-have piece of kitsch.

Amazingly enough, the pregnancy issue in "Juno" is now to be wrestled with as much as the gonzo ending of "There Will Be Blood," the violence in "No Country for Old Men," or the point of "Atonement." I've had as many conversations about Juno MacGuff as I've had about Daniel Plainview. And why we're talking about her with any intensity at all is interesting.

This is partly understandable. "Juno" serves cool, intelligent girls something they rarely see in a movie: themselves. Page perceptively observed this in an interview with Entertainment Weekly a few weeks ago. Juno "dresses like she wants, says what she wants, and doesn't apologize for it." Page added: "Girls haven't had that sort of character before. We don't have our 'Catcher in the Rye.' " And with screenwriter Diablo Cody as a kind of distaff J.D. Salinger, Page has become Holden Caulfield to a generation of underserved girls.

That, of course, is the problem with "Juno." It's a mite jaded - not about which boy to take to the prom or how to run for student body president, but about the life-altering decision of whether to be a mom or not. Juno appears to be over her unplanned pregnancy before it's really begun. She makes haste for an abortion only to realize the girl at the clinic's reception desk is more over it than Juno herself. On the way into the clinic, Juno is accosted by a classmate named Su-Chin, who's carrying a picket sign and repeating "All babies want to get borned." The movie treats her like a joke. Ditto for another of the movie's voices of earnestness, the needy wife for whom Juno eventually carries the baby.

You get why certain girls have seen "Juno" three or four times, why they've erected websites in her honor. The movie flatters them in the same way that "Ferris Bueller's Day Off" flattered entitled boys: by making the title character the only star in the universe. Juno's father and stepmother just get in line behind her decision. Her mild-as-milk baby-daddy goes along with it. And the husband in the adoptive couple finds himself irresistibly attracted to how hip she is. This isn't a moralizing work, which in a sense is a relief since it'd be an After School Special if it mongered a message. As it stands, the movie isn't so much J.D. Salinger as Judy Blume, minus the heroine driven to push the panic button.

I just wished there were someone in the movie to challenge her. Better yet, I wish the movie had found a worthy outlet for her sense of superiority. Juno's kind of independence and certitude were what was missing from the other two popular hormone comedies from last year, "Knocked Up" and "Superbad." What if Seth Rogen and not Michael Cera had knocked up Juno? What might having to withstand the sleazy come-ons of a randy clown like Jonah Hill have brought out of her? Or, at the other extreme, how might she have dealt with the distinctly un-American circumstance of helping a buddy secure an illegal abortion under a dictator's regime, as Anamaria Marinca does in the excellent Romanian thriller, "4 Months 3 Weeks and 2 Days"?

These sorts of mix-'n'-match fantasies miss the point of the actual fantasy in "Juno." Director Jason Reitman conjures an adorable suburban playground out of tidy framing and "la la la" pop songs. Juno forgoes an abortion not because abortions are wrong but because having one would ruin the innocuousness the movie's going for. She doesn't raise the baby because that would cramp her style. It all looks pretty easy from her perspective. Juno totally explains it all.

The movie's popularity also resides in its privileged novelty status: Jamie Lynn Spears aside, the face of unplanned, underage motherhood in this country usually doesn't belong to level-headed middle-class white girls. It's doubtful that the same movie about a black or Hispanic teen would be as popular, just as "Ferris Bueller" would have seemed more like a social-problem film than simply a comedy had it been about a black kid who cut class to ride parade floats and embarrass the principal. The feel-good film about the pregnant 14-year-old Chicana, "Quinceañera," went nowhere in 2006.

Of course, it could also be that Juno is appealing because she doesn't exactly seem 16. It helps explain why Ellen Page is so good in the part - she gets to channel a disillusioned 30-year-old. Sarcasm and cynicism are characteristic of adolescence. So are certain types of emotional posturing. But the movie is a shameless work of glibness, too. The Juno character has been written to possess the mental processing style of an adult who casts her teenage experiences in the form she wishes they might be: the stuff of her own happy movie.

Juno might be the most well-adjusted misfit in the history of movies. Don't let the scowls and rolled eyes fool you. Look at that hamburger phone; she's Little Miss Sunshine.