The bland and the beautiful

Call it the battle of the bland.

Although the big film going into the 2009 Oscars was "Slumdog Millionaire," little of the film's vivid color translated to the evening's couture at this year's Academy Awards. Starlets headed down the red carpet in a steady stream of whites, creams, and beiges. Oh, 2007, how your Oscar evening gown colors were missed this year.

Muther takes a look at the celebrities whose Oscar styles were in good taste — and those whose fashion choices were subject to doubt ... 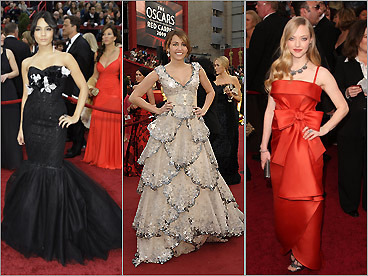 On the red carpet

No Academy Awards event is complete without the march down the red carpet and the 81st annual awards ceremony was no different, with stars as far as the eye and cameras could see.
Photos

On stage at the Oscars

Hugh Jackman hosted the star-studded night, filled with musical performances, teary acceptance speeches, and many gold statues — have a look.