Very much a "quirky," "offbeat," "indie" Sundance romantic comedy, but surprisingly bearable thanks to leads Joseph Gordon-Levitt and Zooey Deschanel. He's a greeting card designer, she's a new office-mate named Summer (get it?), and their 500-day courtship (get it?) is offered up to us like frisky out-of-sequence flashcards by director Mark Webb. It sounds like I hated this movie and I kind of wanted to, but the sucker won me over, iPod-ready soundtrack and all. Maybe it's the movie's vision of a Los Angeles - architectural, downtown, hushed - that we rarely get to see onscreen. 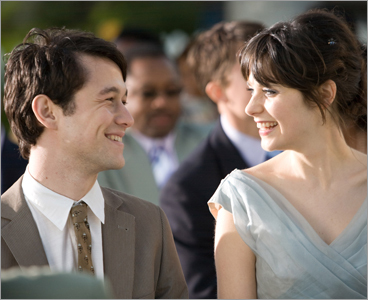