As a bombastic orchestra swells, harsh script type cautions moviegoers in 1936 about an "unspeakable scourge" that is "destroying the youth of America in alarmingly increasing numbers."

We've come a long way since "Reefer Madness" - not to mention Bob Dylan's "Rainy Day Woman #12 and 35" (with its swaying "everybody must get stoned" chorus), which was banned at numerous radio stations in 1966. Over the years, depictions of marijuana in entertainment - from "Cheech & Chong" to the "Harold & Kumar" movies - have become more mainstream. So sit back and queue up Pink Floyd's "Dark Side of the Moon" as we pay tribute to some of the herb's most iconic moments in popular culture. 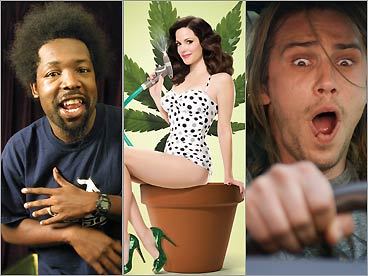