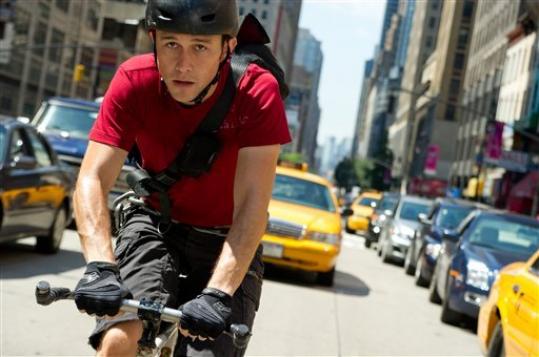 It's a silly movie predicated on a simple premise, but "Premium Rush" is satisfying B-movie entertainment that moves with the swiftness of a Schwinn -- a ride made fun particularly by Michael Shannon's enthrallingly comic performance as a dirty cop in mad pursuit of a bike messenger's cargo.

Joseph Gordon-Levitt plays Wilee, a hardened New York City messenger who's forsaken a promising career in law for the freedom of riding the city's congested streets. His dispatch (Aasif Mandvi) sends him on a seemingly innocuous delivery, picking up an envelope at Columbia University to be dropped off in Chinatown before 7 p.m.

Like any self-respecting NYC bike messenger, Wilee rides a fixed-gear bike, meaning there's one speed and no brakes -- the more hardcore and aesthetically appealing way to ride. "Brakes are death" is his mantra. He revels in the art of traffic navigation, pinpointing routes through red lights, sidewalks and crosstown lanes.

Director and co-writer David Koepp is best known as a screenwriter of blockbusters like "Spider-Man" and "Jurassic Park," but who has sometimes directed -- like the underrated Ricky Gervais comedy "Ghost Town." In "Rush," he charts Wilee's paths with a "Cash Cab"-like map and represents his split-second decision-making with visualizations of disastrous alternatives (like veering left and sideswiping a stroller).

But Wilee's pedal artistry is severely tested when a man (Michael Shannon) attempts to intercept his delivery and aggressively pursues him down the West Side. His motivation is initially unclear, but Koepp fills the film with flashbacks to earlier in the day for exposition.

Such time-shifting is often a clunky technique, but Koepp assembles the backstories without hitting too many potholes. The man, Wilee soon learns, is a police officer named Bobby Monday. In flashbacks, we learn that his Pai Gow habit and his temper have gotten him in deep with Chinatown gamblers. He's caught wind of Wilee's shipment -- an envelope with a ticket good for $50,000 -- and hunts it recklessly.

There are other backstories, too: Wilee is feuding with his girlfriend, Vanessa (Dania Ramirez), a fellow messenger, whom he fears could be lured by his courier rival, the beefy Manny (Wole Parks).

As Wilee -- whose name is meant to evoke the coyote, albeit with the Road Runner's knack for escape -- careens through the city, he's also pursued by a bike cop (stuntman Christopher Place) in a variety of chase scenes. One takes place below an elevated subway, evoking a smidge of "The French Connection."

But is cycling ready for its close-up? "Premium Rush" arrives with some timeliness, a kind of victory lap for the country's growing cycling culture and New York's increasingly bike-friendly streets. Wilee's Wild West and his trusty steed are in some ways behind the curve, as Mayor Bloomberg has largely tamed the Manhattan grid with color-coded bike paths.

Classic movie chase scenes are nearly all of the automotive variety. In one of Shannon's many fine moments, he curses disgustedly at such flimsy prey: a mere bicycle. But the numerous pursuit sequences -- which are a long way from Paul Newman riding to "Rain Drops Keep Fallin' on My Head" in "Butch Cassidy and the Sundance Kid" -- are largely riveting. Koepp filmed them without the aid of visual effects and the precarious, unarmored position of a cyclist adds to the thrill: There is skin in the game.

Gordon-Levitt, a wonderful young actor, carries the film easily and does well to capture the gritty underdog mentality of the bike messenger. (For more on New York's couriers, see the 2001 documentary "Pedal.")

But it's Shannon who doesn't just steal the film, he towers over it. One of the finest actors around, Shannon's gifts are best witnessed on the stage or in last year's excellent "Take Shelter." He is far more than a great heavy, but he is, nevertheless, a great heavy.

His Detective Monday is a combination of desperation and exasperation, a wide-eyed maniac impatient with rage but not so impatient to make the kind of clever, deranged asides Christopher Walken would appreciate. Without him, "Premium Rush" is a passable diversion that mostly keeps in the defined lanes of an action film.

But its course is entirely unpredictable whenever Shannon is on screen. A New Yorker himself, Shannon gives the film -- which sometimes uses the city as merely a race track -- much of its local flavor. When he screams "This whole city hates you" at the bikers, he's channeling a real gripe.

PG -- Parental guidance suggested. Some material may not be suitable for children.

PG-13 -- Special parental guidance strongly suggested for children under 13. Some material may be inappropriate for young children.