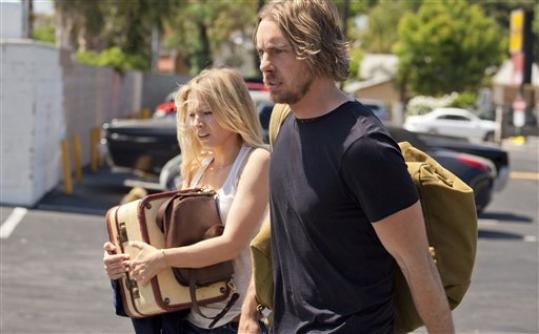 Dax Shepard puts his friends, fiance Kristen Bell, even his own vehicles to good use in "Hit & Run," a fun little car-chase comedy that's quite infectious -- the good time clearly had by the filmmakers rubs off on the audience.

Done on a tiny budget, the movie's stunts and chases are nothing much, but the lack of resources steers the story away from action and toward the characters, who are wry, irreverent, even endearing.

The result is like a student film made by pros, weirdly idiosyncratic but efficiently paced. It's well-scripted and well-acted, and if "Hit & Run" lingers too long on so-so gags and inside jokes Shepard and his friends found particularly funny, it compensates with a freewheeling spirit that pulls viewers along for the ride.

Shepard stars as a guy in witness protection who took the name Charlie Bronson -- just why is one of the subtly amusing bits of "Hit & Run." A former getaway driver for a gang of bank robbers, Charlie betrayed his pals for a sort-of noble reason, but Shepard's doesn't play him as a hoodlum with a halo. Charlie's a man who did wrong, is trying to make amends but offers no excuses for his misdeeds and is willing to pay the price should they come back to haunt him.

Of course, they do. Now living in rural California with academic Annie (Bell), Charlie decides to break cover and drive her back to his old stomping grounds in Los Angeles, where she's got an interview for her dream job running a campus program in conflict resolution.

Through the scheming of her old beau, Gil (Michael Rosenbaum), Charlie and Annie wind up pursued by his old gang, including Alex Demitri (Cooper) and Charlie's ex-girlfriend, Neve (Bryant).

Arnold plays federal agent Randy, Charlie's witness-protection minder. A hapless blusterer, Randy's at the center of many of the movie's physical gags; some are mildly funny, but they're mostly repetitive and disposable, often putting the brakes on the action so Arnold can launch into another fit of bellowing.

Oddly for a road romp, the main charm of "Hit & Run" comes from the verbal exchanges, either when the characters are standing still or sharing strange intimacies during a high-speed chase.

Shepard and Bell make such a natural couple on screen that it's easy to imagine them, right or wrong, living out a blissfully perfect relationship in real life. They share low-key, tender moments and some tough, intelligent quarrels that feel genuine enough to have filtered up out of their own experiences together.

Cooper's an oddly engaging bad guy, his dreadlocks and gaudy red running pants setting him apart from the usual Hollywood heavy. He blends viciousness with sensitivity, compassion with greed, making Alex all the more volatile, dangerous and entertaining for his unpredictability.

Chenoweth has a couple of bawdy scenes as Annie's boss, and Beau Bridges pops up briefly as Charlie's dad. "Hit & Run" also features quick cameos from other buddies of Shepard and his crew. The goodwill among all these friends spills off the screen to make "Hit & Run," despite its bland title, more clever and distinctive than the average chase flick.

Shepard cast two of his own vehicles -- a supercharged 1967 Lincoln Continental and his Tatum racing dune buggy -- and he demands as much from them as he does of the actors. Our cars are extensions of our lives and temperaments. The fact that Shepard laid his wheels on the line puts an even more personal spin on the movie.

"Hit & Run," an Open Road Films release, is rated R for pervasive language including sexual references, graphic nudity, some violence and drug content. Running time: 99 minutes. Two and a half stars out of four.

PG -- Parental guidance suggested. Some material may not be suitable for children.

PG-13 -- Special parental guidance strongly suggested for children under 13. Some material may be inappropriate for young children.