To live and die in Stockholm’s dense traffic 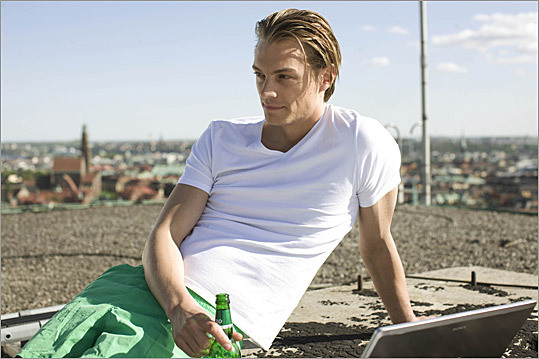 The Swedish crime film “Easy Money” begins with a prison break and ends with an imprisonment. That neatness chimes with the confident efficiency of director Daniél Espinosa’s filmmaking. He’s best-known here for “Safe House,” the thriller starring Denzel Washington and Ryan Reynolds which came out last winter. The hand-held camerawork may be shaky, and the editing flit furiously — but Espinosa has them shaking and flitting on purpose.

That neatness doesn’t chime with the best thing about “Easy Money”: its sense of a richly messy Stockholm underworld. There are Serbs and Albanians and Arabs and Germans and, of course, the occasional Swede, as well as at least one crucial Spaniard. Espinosa is himself the son of a Swedish mother and Chilean father, so he’s no stranger to the idea of a post-Swedish Sweden.

Three main characters intersect in the story. The person attempting to get out of prison is the Spaniard, Jorge (Matias Padin Varela). He has connections to a cocaine ring in Germany. JW (Joel Kinnaman) is a very ambitious business student who moonlights as a cab driver. JW’s boss does some moonlighting of his own. The taxi company is a front for a drug operation. He seeks Jorge’s help in getting the cocaine (worth more than $5 million) and gets an offer of help from JW in laundering the cash once the score has been made.

Make that if the score is made. A rival Serbian gangster is willing to wage all-out war to prevent the deal. The problem is that his chief enforcer, Mrado (Dragomir Mrsic), thinks a war is a bad idea. This sets in motion a carousel of plotting, violence, and betrayal that Espinosa manages to keep moving smoothly.

JW, the one Swedish native involved in the machinations, is the most incongruous presence in the movie. “You’re not from around here, are you?” Jorge asks him. Espinosa doesn’t belabor the irony. Instead, he lets us see how the elite world JW seeks entree to is as corrupt as the criminal world he hopes will finance his ambitions. There’s a bit of Patricia Highsmith’s Ripley character to JW, though he has a pretty-boy brittleness that makes him that much more intriguing. Ripley is the Nietzschean superman as supervillain. JW, who slicks back his hair like Michael Douglas in “Wall Street,” is two parts business-school greedhead to two parts GQ model (he has male fashion photos pinned to the wall of his bedroom).

In some ways “Easy Money” recalls Steven Soderbergh’s “Traffic.” They have drug dealing in common, of course, but also a sense of constant swirl and density of onscreen population. “Traffic” originated as a BBC miniseries, “Traffik”; and “Easy Money” might easily work better at extended length (HBO take note). Certain implausibilities would be less vexing if the plot had more room to breathe; and the social textures of the Stockholm underworld could be explored further.

There’s a crucial divergence between “Traffic” and “Easy Money.” Soderbergh’s movie has geographic sweep: Mexico, Southern California, Washington, D.C., the Midwest. Espinosa’s film is excitingly impacted. Swedes and Serbs and Arabs all roil together, confined by Stockholm and environs. When JW talks about coming from the north of Sweden, it sounds as far away as when Mrado talks about moving back to Belgrade or Jorge mentions a place he’s bought in South America. Holding all these characters together — the medium they’re suspended in (as if they were specimens) — is the watery light and gray-blue palette of cinematographer Aril Wretblad. This is no tourist view of the Swedish capital, but in its cool, austere way it’s kind of ravishing.

“Easy Money” is an adaptation of the first novel in Jens Lapidus’s best-selling Stockholm Noir Trilogy. The weakest thing in the movie is a highly literary conceit of giving Jorge, JW, and Mrado troubled childhoods and currently complicated family situations. Jorge’s sister is pregnant. JW’s social climbing clearly stems from wanting to put as much distance as possible between him and his upbringing. Mrado, a single parent, unexpectedly has to care for his 8-year-old daughter (a pretty good reason to want no part of a gang war).

Some of this works. Mrado’s evolution from particularly nasty thug to someone perplexingly human is startling — and, thanks to Mrsic, persuasive. More often, the elements of domestic melodrama detract from the film. Or maybe they just need further development? “Snabba Cash II,” the Swedish title, is already in the can.