Angst and doubt on an island off Venice 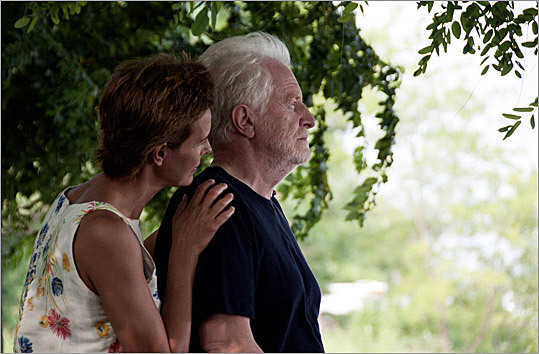 Everyone is equal parts emotional victim and villain in “Unforgivable,” an elegantly rambling Franco-Italian affair about the ways we do each other wrong while trying to do each other right.

It’s the latest film from André Téchiné (“Wild Reeds,” “The Girl on the Train”), a lion of French cinema who, at 69, may be using the story to explore his own anxieties. The main character, Francis (André Dussollier), is an aging French writer with a successful career in crime novels and a rakish romantic past; he works hard to convince himself he’s Hemingway-esque instead of merely old.

In the opening scenes of “Unforgivable,” Francis rents an island home across the lagoon from Venice; he’s creatively blocked and wants a writer’s getaway. He also wants the real estate agent, Judith, and we understand why once we realize she’s played by Carole Bouquet, as eerily beautiful at 54 as she was in Luis Buñuel’s “That Obscure Object of Desire” back in 1977. He’ll take the house only if she’ll move in with him; cut to a year and a half later and Francis and Judith are happily married.

Or so it seems. “Unforgivable” is about doubt, the gnawing gap between the things we crave and our inability to own them. That extends to children as well as lovers and spouses: Francis’s grown daughter Alice (Mélanie Thierry), an immature party girl, arrives with her own teenage daughter (Zoé Duthion) but quickly ditches the island to hang out in Venice with Alvise (Andrea Pergolesi), a young aristocrat turned drug dealer. The father’s panic over her disappearance spreads like a cancer; soon he’s doubting his wife’s fidelity, spying on her through binoculars and hiring an emotionally unstable ex-convict (Mauro Conte) to follow her.

The movie is based on a novel by the prolific French writer Philippe Djian (“Betty Blue”), and it has a novel’s interior logic and sense of place. What it doesn’t have is much of a cinematic focus. Téchiné flits back and forth among his growing cast of characters, plangently observing their chic, desperate attempts to connect. But “Unforgivable” never settles on a convincing tone: Max Richter’s score chugs along like a suspense thriller, and if the film appears to be developing into a mystery early on, the reappearance of Alice quashes that notion.

The mystery is other people, and their frustrating, “unforgivable” unreliability. (Téchiné draws subtle parallels between his wayward characters and the eternal figures of Renaissance painting.) The film’s most alluring enigma is Judith, who appears to have slept with everyone in the cast at one point or another in her life and who moves through the world with a cool, clear-eyed self-possession that’s both magnetic and maddening. One of her ex-lovers angrily accuses her — “You turn everybody on, but no one turns you on” — but that’s not exactly true. It’s just that Judith doesn’t need people even when she wants them, and how unforgivable is that?

It’s all very European and emotionally opaque; this is hardly the Téchiné movie to start with. But, look, it’s summer, and there are worse ways to spend two hours than watching pretty people in gorgeous settings hash out their angst. “Unforgivable” is best approached as vacation-fantasy schadenfreude that leaves a mild but lingering sting.

Written by: Téchiné and Mehdi Ben Attia, based on a novel by Philippe Djian

In French and Italian, with subtitles