'Beasts of the Southern Wild' 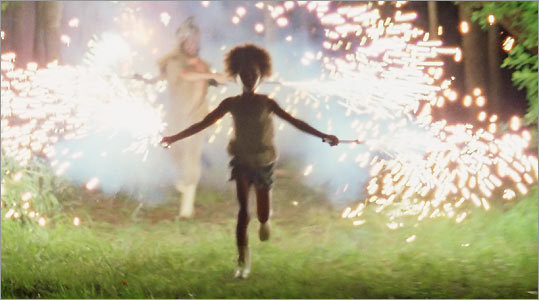 Here is why some of us love the movies: They let you see with brand new eyes. Not all the time, and not even often. Usually, the eyes are tired or cynical or cowed by the need to turn a profit; they let us see only what we’re used to seeing in a film, not what it’s possible to see. And it takes a very special sensibility to try to see something impossible.

“Beasts of the Southern Wild” is that miracle, a movie that shows us an entire new continent unexpectedly close to home. It’s probable that the hype (including this review) will have got to you and that you’ll greet “Beasts” — terrible title, by the way — with confusion or a shrug. I hope not. Bring no expectations of how movies, especially this one, are supposed to behave.

Rather than tell a straightforward story, “Beasts” steeps us in a place and its people: the Bathtub, a small hamlet clinging to the edge of coastal Louisiana. It’s more a state of human entropy than an actual village. The houses are nailed together from driftwood and tin scraps; dirt roads are carved out of overgrowth; there’s no difference between what’s useful and what’s junk. It’s chaos and it’s a community.

We take it in through the eyes of Hushpuppy, a 6-year-old girl played by Quvenzhané Wallis in a performance that grows in majesty as the movie progresses. Her thoughts, hushed and verging on the precious, fill the soundtrack. She’s trying to make sense of this world, and the movie, pitched between realism and fable, is the story of how she finally does.

That balance is the key to the movie’s magic. We’re in a real location, in a real year — 2005, and Hurricane Katrina is bearing down on New Orleans — but also in a place beyond history. Hushpuppy lives with her father Wink (Dwight Henry) in a pair of ramshackle trailers, and we have to pick out the specifics of their relationship the way you’d find your way across an uncleared lot. The dad is harsh but loving and fiercely protective. He’s ill with a heart condition that’s both medical and mythological. The girl’s mother is gone, either dead or exiled to a floating island whose lights steadily blink on the horizon. Even Hushpuppy’s gender seems indeterminate at first.

And what are we to make of the Aurochs, prehistoric beasts Hushpuppy learns about in her classroom and whom she imagines breaking free of their glacial prisons during the apocalypse? First-time feature director Benh Zeitlin and his co-writer Lucy Alibar interweave their strands so gracefully that the movie feels like it’s simultaneously unfolding in the now and forever. In the storm’s aftermath, the remaining inhabitants of the Bathtub band together for a survivors’ party, then hunker down to resist the government’s attempts to evacuate them. There’s a sequence involving an alligator’s corpse loaded with dynamite that comes close to outsider art, half “Pogo” and half heroic mural. The movie testifies to an urge for freedom that exists almost at the molecular level.

By the way, who are the outsiders here? Hushpuppy and her companions or the filmmakers, white college kids (Zeitlin went to Wesleyan) who have reimagined a world that isn’t their own? Accusations of exploitation and well-intentioned classism have been leveled at “Beasts of the Southern Wild,” but the charges don’t stick. There’s too much empathy in the film’s overwhelming profusion of detail, in the characters that seem both life-size and larger than life, and, besides, the filmmakers aren’t trying to make a documentary. They’re working at something harder and more holy: the poetry of existence burned directly onto film. To come from the summer’s dull superhero juggernauts into this movie is to rediscover the creative fires of youth and the passion of people truly alive to what they see.

That’s why some audiences, conditioned to the cues mainstream films give us, may have trouble responding. “Beasts of the Southern Wild” is hardly avant-garde, and its narrative is easy to suss out, but it plays by its own rules and it’s consciously, intuitively a shambles. You have to give up your willpower and let the film roll over you like kudzu. If you try to hack away at it, you’ll be exhausted in minutes.

Eventually, Hushpuppy makes it to that floating castle — the trip out there, with a grizzled local fisherman, feels like a calm in the eye of the storm — and she meets a woman who may or may not be her mother, who may or may not be a dream. By now, it seems like “Beasts of the Southern Wild” can’t get any wilder, richer, weirder, but it does, climbing up the rungs of exaltation as the girl leaves behind a broken patriarchal childhood for a mystical communion with the Mother of us all. At the beginning of the film, she’s just a kid. By the end, she’s a tribal elder whose knowledge seems unimaginably vast.

I’m not sure the movie would work without the score by Zeitlin and Dan Romer; the music is down-home yet eternal, and it drives the film ecstatically forward. I’m not sure how Zeitlin pulled off the Aurochs — are they giant tricked-out hogs? I’m not sure how anything in this movie actually came to be, and I’m afraid that knowing would break the spell. I just know that “Beasts of the Southern Wild” is the first movie in a long time to feel like the first movie ever made.

Written by: Zeitlin and