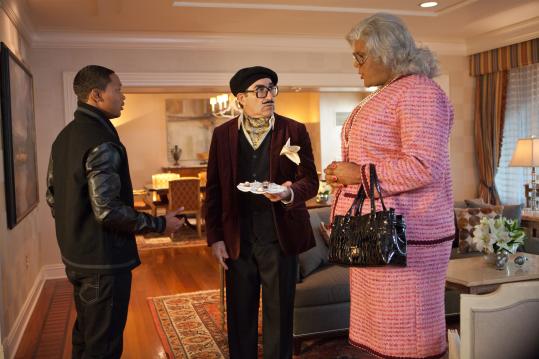 Tyler Perry is a phenomenon. The two, or even three, movies a year from him keep coming out, and the audiences keep coming out, too. At the first screening Friday of “Madea’s Witness Protection” at the AMC Boston Common the theater was nearly a third full. That’s no mean turnout for 11:15 a.m. And whenever Madea offered even a semi-choice Madea-ism — “After all that, you need to buy me a cigarette and drink,” she says to the TSA guy after an airport patdown; or “Ooh, Oprah Winfrey must stay here,” she declares in the lobby of a Manhattan luxury hotel — whooping and hollering would ensue from the audience.

Which is understandable. Perry knows how ridiculous he looks in long gray wig and floral-pattern housedress, and he plays it for all it’s worth, with hip waggles and over-the-top line readings that make something that looks as flat on the page as that Oprah line genuinely funny onscreen. There’s a reason Madea keeps coming back; she connects with viewers, and her creator-impersonator knows it.

Perry can dial it down, too. He has real charm and presence as Brian, Madea’s nephew. (Joe, Perry’s other role, as Madea’s brother and Brian’s dad, that’s a different story.) Brian is a prosecutor in the US attorney’s office in Atlanta. His big case involves a Madoff-like Ponzi scheme that organized crime has been using to launder money. The fall guy for the scheme is played by Eugene Levy (who in horn-rims is starting to look a lot like Martin Scorsese). His boss tells Brian they need to stash Levy and his family somewhere. One guess where they end up.

You can probably come up with a lot of the fish-out-of-water lines yourself. Maybe the funniest is Madea trying to explain her new housemates to a neighbor. “My cousins,” she says, “they lost all the pigmentation in their skin overnight.” You probably couldn’t predict that Denise Richards plays Levy’s wife (they’re definitely a contender for All-Time Unlikeliest Movie Couple), or that Doris Roberts plays his semi-senile mother (a thankless part). And you certainly couldn’t predict the subplot about Madea maybe having another nephew. Or that she gets to wear a pink Chanel suit. “You look like a big-ass bottle of Pepto-Bismol,” her brother grumps.

True enough, but it’s a big-ass bottle of Pepto-Bismol that looks like a million bucks — $53 million, which is what “Madea’s Big Happy Family” grossed last year. Reviewing a Tyler Perry movie is a bit like reviewing the weather report. People who want to watch it are going to do so, regardless of what anyone says about it. And that’s not even factoring in Charlie Sheen — that most discerning of ladies’ men — showing up in the credits blooper reel to give Madea a squeeze or two.