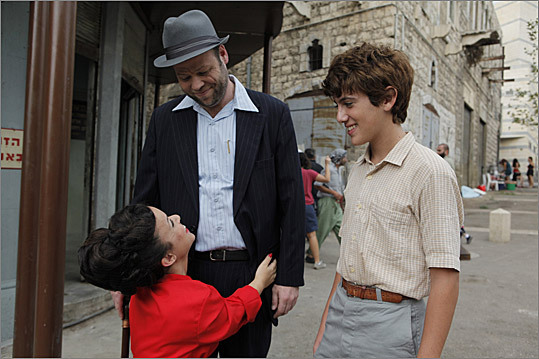 How does a filmmaker tell a Holocaust story that hasn’t been told before? “The Matchmaker” does it by weaving fable with realism, coming-of-age innocence with adult grief, and guilt with romanticism.

The film opens in 2006 during Israel’s war with Lebanon. Middle-aged Arik Burstein (Eyal Shechter) receives word that a shadowy figure from his youth has died and willed him a fortune. Flashback to Haifa in 1968: While much of the rest of the world is in militant, youthful rebellion, Haifa’s population of Holocaust survivors rebels in a different way. Although their mere presence is painful for a nation stepping into the future, these survivors are determined to live, to find love, and, in what’s perhaps the most radical rebellion of all, to remain hopeful.

The teenage Arik’s (Tuval Shafir) parents are survivors but they have shared little of what happened “there” with him. He’s left to seek information at the library, where he befriends the mild-mannered librarian Meir (Dror Keren). Arik’s father is wary of Yankele Bride (Adir Miller, an Israeli stand-up comedian), a fellow survivor of the Romanian camps who now makes a living on the wrong side of town, where gamblers, misfits, and prostitutes dwell. Yankele is a part-time matchmaker. He provides his clients with “what they need, not what they want.”

Gradually, Arik begins working for Yankele, following potential wives and husbands around the seedy sections to be sure they are who they say they are. Writer-director Avi Nesher brings us into a Fellini-esque world of mismatched souls who’ve found some form of community and tolerance, although the larger city shuns them. There’s the family of dwarves who run the local movie theater, where beautiful, short-statured Sylvia (Bat-el Papura) sells tickets and is Yankele’s most challenging client. There’s Clara (Maya Dagan), who helps Yankele run illegal card games in her apartment and whose intolerance of heat or cold on her teeth betrays much deeper cruelties suffered in the camps. Yankele, his own face scarred by some atrocity we can only imagine, loves Clara even though she apologetically keeps him at a distance. In one of the film’s most gripping but subtle moments, Yankele tells Arik a devastating story of how a couple fleeing the Nazis came together. It’s proof, he says, that love can win out even in the bleakest conditions. It’s possible that Yankele and Clara are that couple, and the memory and mystery haunt the film.

Nesher effectively parallels youthful ignorance in this new world with the wounded adults who’ve seen too much. “The Matchmaker” is about love — not just for the young but for those who, despite the world’s best efforts, refuse to give up on it.

In Hebrew, with subtitles